Seven-year-old Mansi poses with a picture of her missing three-year-old sister Muskaan inside their house in New Delhi. Muskaan disappeared while playing in the neighbourhood on October 30, 2010, her family says.

She is one of many who have vanished: between the start of 2013 and May 8 alone, 725 children in Delhi were reported missing and are still untraced, according to India's Zonal Integrated Police Network website.

"Nothing can surpass the agony and desperation that marks these people’s lives."

Atika, 10, woke up early one morning in 2008 and was sent by her mother to buy a few items from a nearby shop. She returned and told her mother she would prepare tea for her father before quickly going to use a communal toilet close to her house. But she never returned.

Ambika was a feisty 15-year-old high school student who took wrestling classes. Her mother returned home from work late at night on October 10, 2010. She woke up the next morning and found her daughter missing.

Atika and Ambika are among the thousands of children who go missing from India's streets, schools and homes every year.

Following the case of a five-year-old girl in Delhi, who police said was abducted on April 15, raped, and kept in captivity, I chose to find out what happens to girls who go missing and examine the struggles their parents go through to find them.

According to a report by the Delhi-based NGO Bachpan Bachao Andolan, which works to promote children’s rights, between January 2013 and April 20 there were approximately 680 cases of children going missing in Delhi, 65 percent of which were girls. In most cases, girls are either forced into the sex trade or trafficked to placement agencies to work as domestic servants.

I spent hours with them, listening to their harrowing tales and taking time to understand the grief and misery these families were going through. Only then did I turn on my camera to take pictures.

Despite retelling their stories again and again to hundreds of people over many years, the mothers I met still cried their eyes out for their missing daughters when they spoke to me.

The family of Tyaba, who went missing in Delhi in 2009 at the age of three, has searched across the country, visiting adoption homes, red light districts and orphanages in all of India's major cities.

Other families, however, simply don't have the means to actively look for their missing daughters. One example was Mamta's family from Bihar, India's poorest state, who are working in Delhi as labourers and lost their seven-year-old daughter Bharti in April this year. Living on a construction site where they work, they earn around $4 a day and have to rely on the police, who have a reputation for being inactive and corrupt when handling such cases.

I found that parents were keeping memories of their missing daughters alive through objects that had been left behind. The mother of Atika, the 10 year old who went missing in 2008, continues to stitch embroidery for her daughter's "bistra" - a bed sheet gifted to Muslim brides on their wedding day - hoping that one day she'll return.

Nothing can surpass the agony and desperation that marks these people’s lives. The haunted looks on their faces speak of pain that is beyond all comprehension. I'm not sure if my pictures will bring these missing daughters back to their parents, but maybe they'll make people stop and think the next time they see a girl begging on the side of the street or a young maid working inside a home.

It’s time to stop being silent spectators and take steps in the right direction or else, who knows, the nightmare might come knocking on our doors… 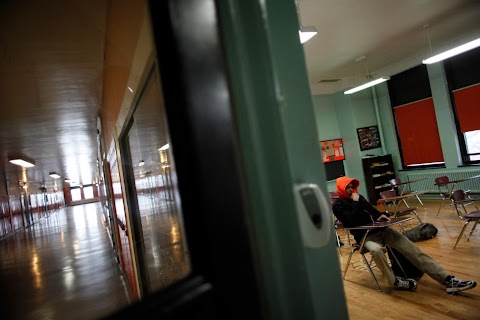 Changing landscape of a Catholic School