A road snakes past a lake filled with glacial melt water near Chopicalqui mountain in Huascaran National Park.

Peru is home to 71 percent of the world's tropical glaciers, which are a source of fresh water for millions, but 22 percent of the surface area of Peruvian glaciers has disappeared in the past 30 years alone, according to The World Bank.

View of the Pastoruri glacier from on top the glacier.

"It is really the roof of the world, mist surrounds you as your body moves in slow motion"

Climate change now has a historic route in the Andean cordillera. The gradual melting of tropical glaciers (glaciers located within the tropical latitudes) in one town has led to a decline in tourism that has made villagers look for alternatives to continue attracting tourists.

Peru is a country of multiple ecosystems. To travel from the seaside capital of Lima to 5,000 meters (3,107 feet) above sea level requires just a few hours driving uphill. One of the most important cities in the altitude, Huaraz, is famous for its nearby snow-capped mountains and glaciers. Huaraz is also frequented by mountain climbers, many of whom aim to reach Huascaran, Peru’s tallest mountain and the highest point in the world’s tropics at 6,768 meters (22,205 feet) high.

Huaraz is separated from Lima by about 500 kms (310 miles) of road, but it is much more distant in customs and economic development. One of the biggest attractions near the city is the Pastoruri glacier, on top of which visitors used to hike and play in the snow and ice.

In recent years the glacier began noticeably disappearing, and the shrinking has become so severe that the community had to bar direct access to the ice mass, thinking that the tourist activity was also contributing to the glacier’s crisis. Apart from the impact on tourism, there is also a serious lack of water for farming that used to come from the glacier’s normal melting, and that has a big social impact.

Today there is a new path which tourists can take to approach the glacier, without touching it. The creators call it the Climate Change Route. At around 5,000 meters above sea level, you can clearly see and feel the change; below the layers of ice there is brown and black rock which appears to be growing in relation to the glacier.

As the local population promotes the new route to bring tourists back, scientists have been monitoring the changes in Pastoruri.

For Luzmila Davila of Peru’s Glaciology Unit, the melting of Pastoruri is due more to climate change than tourist activity. She said that the shrinking is unstoppable, with half the ice mass lost in the past 17 years. She explained that although the glacier is a reservoir of freshwater in solid state, it’s very sensitive to climatic change. This is especially true with tropical glaciers like this and others in the Andes, whose bases are surrounded by hot air.

I could sense the pureness of the water as I hiked on snow and ice up the glacier. There is harmony in the icicles and the small mounds of ice that form.

Up there the lack of oxygen didn’t let me think clearly, and walking is difficult for anyone who is not a mountaineer and lives at sea level. It is really the roof of the world, mist surrounds you as your body moves in slow motion.

I went with a mountain guide, because to go alone would have been risky. He knows the terrain. We stepped over crevices and heard avalanches. Just turning slowly around to take a 360 degree panoramic photo left me dizzy. My hands hurt from the intense cold after taking off my gloves to push the shutter. My heart beat with each step like when I once ran a marathon. But the chance to be with nature this way was unique. The changes in weather came minute by minute, with mist covering the glaciers from view, and then suddenly clearing.

It snowed, then rained, then cleared. I had to shoot pictures quickly as the snow and rain soaked everything. Even as my hand froze I could only feel joy at the vastness of the ice.

An ice cave at the foot of the glacier is a threat, according to Luzmila. She explained that the caves are formed by the erosion of the glacier and signal the beginning of the thaw. But I couldn’t resist trying my luck at entering and seeing the ice melting from as close as possible. It wasn’t a safe place, but I had to see it. I stood observing water drip from the icicles.

Lakes below the glacier’s tongue seem to be a good sign, but they are formed by the melting of the ice that is disappearing. The local population is already in crisis. I came across flower growers Juan and Elida, who told me that when they were kids the mountain peaks were all covered with snow. Now they can’t even see snow from their homes, and for the first time the community has had fights over water. They say they can feel pollution in the air. As they spoke to me they cut flowers and laughed.

My first trip to the Andes was when I was eight, here in Huaraz. They had just finished the road from Lima to Huaraz and my family traveled in a Volkswagen. We rode a truck to reach Huascaran, which was completely covered in snow. Now it’s nearly barren.

Another impression from that trip was when we passed Yungay, a village below the mountain. Two years earlier, in 1970, Yungay had been buried by an avalanche of ice and rocks loosened by an earthquake. Some 18,000 people had died in that disaster. We saw rocks and mud and people still living in tents. That sight stays with me even today. I returned to those places now, thinking of the glaciers and how strong and fearful they are.

Andeans call them and all sacred mountains “apu," meaning a mountain god or spirit. The snow-capped ones are the most powerful apus because they provide water, but they also punish with landslides.

I met an elderly man picking up plastic bottles in the mist below Huascaran. He told me that the Apus are sad and were crying a lot, and that’s why the snow was disappearing. He hoped that by picking up the trash he could make them happy again. 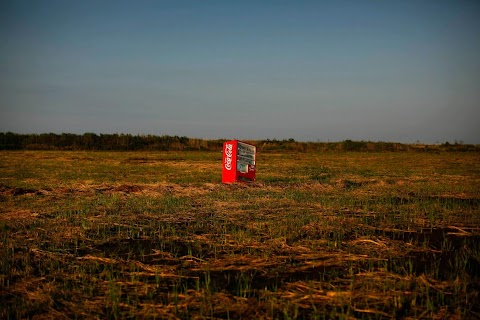 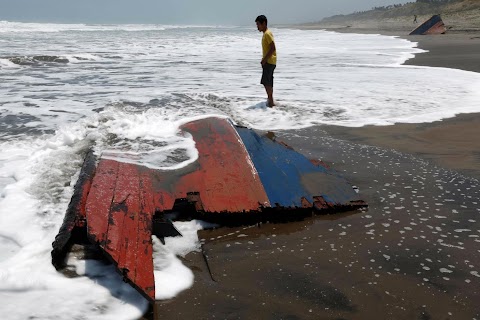