At 9:59 a.m. on Sept. 11, 2001, the World Trade Center South Tower fell. About 15 minutes later, photographer Shannon Stapleton scrambled over debris, peering through dust and smoke for pictures near the still-standing but crippled North Tower.

Stapleton, then a freelancer for Reuters, took a few frames of a group of people emerging from what remained of the building’s lobby. In the middle of the group, a blonde woman clutches a jacket to her face. The corners of her mouth are turned down, her eyes downcast.

In late spring this year, Bergeron emailed Stapleton about the 9/11 picture. A French documentary maker had asked her about it.

“I contacted her, and it was like, we’d known each other our whole life,” he says.

Stapleton decided he wanted to meet her. In June, he went down to Georgia.

During his visit, Bergeron took Stapleton to meet her beloved horse farm, and then to the courthouse in Cummings, where she often works. It was the same courthouse where she pleaded guilty to her second charge of driving under the influence and where a judge ordered her into a court-administered treatment program.

There, Bergeron says she asked Stapleton to help her with an Army veteran who was struggling with PTSD and alcohol addiction after his time in Afghanistan. The veteran was in court for a probation hearing after pleading guilty to traffic charges, including one involving DUI, his fourth in less than a decade.

“I have been trying to get him out of himself,” she recalls. “He had a lot of issues.”

Stapleton agreed to try. He stepped forward and touched the man on his shoulder.

“Hey, brother. I’m Shannon, Kayla’s friend,” Stapleton says he told the man. “I just want you to know I’m here. [If] you ever want to talk to somebody, I can.”

Bergeron says she didn’t expect anything to come of it, and Stapleton went back to his hotel room for a nap. Not long after falling asleep, he was awoken by a call from Bergeron. The man, she said, wanted to talk to him. Stapleton got out of bed and drove 40 minutes north, back to the her office.

“Me and him, we had this deep, deep conversation,” Stapleton says. The U.S. involvement in Afghanistan was coming to an end. “He was in Afghanistan. So he’s seeing this whole thing collapse, and he’s seeing all his efforts go for naught.”

Stapleton isn’t sure that chat made a difference, but he says that at least the man opened up about his experiences, and that’s a start.

When Stapleton was visiting Bergeron, she says she offered a little advice on dealing with PTSD: “I told Shannon, ‘It’s therapy – therapy and medicine. This will be with you your whole life. It never goes away, but it lessens over time.’” 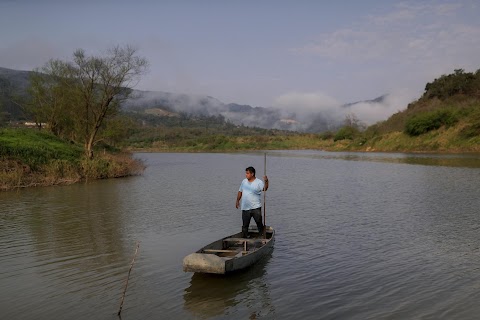