After seizing large parts of Iraq and neighbouring Syria in 2014, Islamic State imposed its strict interpretation of Islamic law and began to establish the basic frameworks of statehood such as taxes and regulation.

But that project is collapsing in the face of a military campaign in Iraq to crush the militants, with unexpected consequences for ordinary people escaping their grip.

Births in Islamic State-controlled areas were registered with authorities that are not considered valid outside that shrinking territory - or not registered at all.

Ali, a first-time father from inside Mosul, spoke to Reuters last week holding his 19-month-old daughter Amal, who was born with a brain defect that has kept her from learning to walk.

He secured a birth certificate for the girl from a neighbour who worked in the local hospital but refused to let Islamic State authenticate it with their official stamp.

"The doctor told me, 'Don't let anyone know you have the certificate or they will slaughter us both'," Ali said.

Abu Saud, 41-year-old father of five, said he decided not to register his son's birth in October 2014 at a village south of Mosul controlled at the time by Islamic State.

"With my other children, I would go to the residency department to register them with a photo and stamp," he said outside his tent in Debaga. "It proves that this is my child or your child or his child. But now, he doesn't have an ID card." 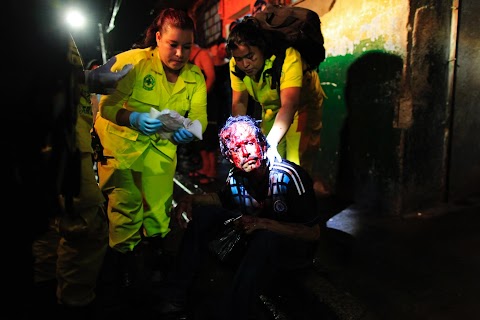