Compared to the United States, Canada has relatively strict gun control laws, but this does not mean that there are not plenty of shooting enthusiasts in the country.

Photographer Andy Clark spent time taking pictures of people who use guns for sport or pleasure in Canada, both at a public indoor range in British Columbia and at the Vancouver Gun Club, a shotgun-only club formed in 1924 whose members shoot skeet, trap and more.

“I plan to acquire my gun license and return to the club in the coming months along with my son."

It was a cold, damp autumn day and, as I remember it, I was sitting inside a cinder block bunker, terrified I was going to lose my hand as I loaded black clay disks into the machine in front of me.

Seconds later, I would hear a muffled voice shout out and the machine’s springs and mechanism would suddenly and violently release, flinging the disk out of the bunker. The action would be followed by a muted: “Boom! Boom!”

I would then quickly lean down, take another disk from the box, and gingerly place it in the machine. It was at this point that I would worry one of the distant voices would shout too soon and, instead of the disk, I would catch and propel my severed hand out of the bunker.

Of course this never happened and, once I got the rhythm, my fear slowly subsided. Well, sort of…

This all happened when I was about 12 years old and was helping out at the annual Thanksgiving Turkey Shoot at the local Trap Shooting Club just outside Ancaster, Ontario.

Each year, this contest was held the weekend before Thanksgiving as a dozen or so club members, including my dad, all vied to hit the most clay pigeons and go home with a freshly cleaned turkey donated by a local farmer.

Though my dad and grandfather had versed me well in handling guns by that age, I was still too young to take part. That was why I was drafted into loading the machine instead.

All of this happened a long time ago now, but it was something I thought about recently as I made my way to the Vancouver Gun Club in Richmond, British Columbia. I was on my first of two visits to gun ranges, which I had organised as part of a picture series that Reuters was doing on firearms.

The Vancouver Gun Club dates back to 1924 and is nestled amongst farmland on 39 acres of open and wooded property. The outdoor range is for shotguns only and offers trap, skeet and Olympic trap shooting, as well as sporting clays and another type of shotgun sport shooting called Five Stand. The club has an annual membership of about 400, but non-members can also get day passes to use its facilities.

When I arrived, I was greeted by a member of the executive, Brian Wong. After giving me a quick tour, he said that once I was done taking pictures I should come over to the trap shooting and give it a try myself.

Over the next four or five hours I wandered the grounds, photographing some of the 50 or so people out that day. I saw men and women ranging in age from their mid-teens to their 70s, and shotguns varying in value from hundreds to tens of thousands of dollars.

While taking pictures at one of the sporting clays stations, one of the shooters suggested that if he managed to hit the clay, I should be able to get a picture of the hit. I guess you might say he challenged me to a shooting contest.

Obviously I had to wait for the gun to go off before I fired, and it took a few tries for me to follow the bright orange clays out with my lens. We soon were in sync, however, and as he triggered his double-barrelled shotgun, I triggered my 10fps camera. I would hazard to say that, after about a dozen attempts, my hit and miss rate was about the same as the shooter’s.

At the end of both days I spent at the club, I took up Brian’s offer to shoot a few clays myself. Although maybe it would be more accurate to say I shot “at” a few clays…

I spent many a weekend as a young lad firing at moving and stationary targets with my dad, but I gave it up as my photojournalism career began in my late teens. I was therefore quite surprised to realise that shooting a shotgun and firing a camera at a moving target had many similarities.

The skills don’t match up perfectly, however. Suffice to say, I hope the photos I got over the two days were better than the results I had with the gun after all these years.

Still, all in all I had a marvellous time at the Vancouver Gun Club. In fact, I plan to acquire my gun license and return to the club in the coming months along with my son so that I can pass on the good times I had with my dad at the annual Thanksgiving Turkey Shoot. 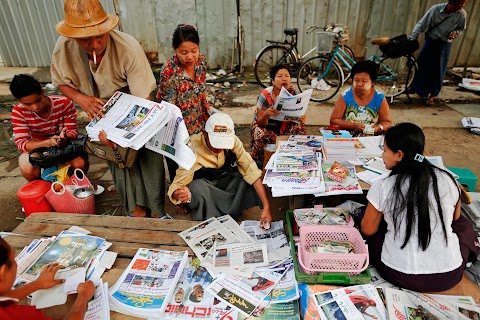 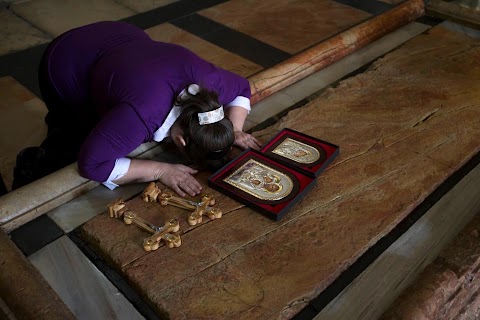 Easter at the Church of the Holy Sepulchre