Few things evoke the American Wild West more than the sight of cowboys with their herd.

But, in one sense at least, the operation of Colorado rancher Steve Pargin is anything but wild. His team handle both the cattle and the landscape where they graze with care, moving the herd from place to place and preventing them from causing damage to fragile ecosystems by staying in a single area too long.

"In this rough terrain, however, it takes a special breed of cowboy to find and move the cattle."

According to official statistics, around one percent of the United States’ population operates farms or ranches. After eight years of living in New York, I have discovered that the land rights issues that I remember my parents discussing when I was a child in rural New Mexico are all but invisible to the remaining 99 percent.

But ranchers’ land rights became big news recently, through one extreme example. This was the story of Cliven Bundy, a Nevada cattle rancher who stopped paying grazing fees, and whose protest became a catalyst for an armed standoff with Bureau of Land Management rangers in the Nevada desert.

This level of hostility between a rancher and the government is rare, but an unfortunate side effect of stories like Bundy’s is that many Americans begin to think that these outliers are representative of the group, which is certainly not true.

But one important similarity between someone like Bundy and an average rancher in the West is that many don’t own enough land to graze the amount of cattle that it takes to make a living. According to a 2012 congressional study, almost half of the land in the western United States is federally owned.

Having someone, whoever they are, managing the land is not such a bad thing. The 1930s “Dust Bowl” disaster, when droughts and dust storms plagued large parts of the United States, illuminated the tough reality of land overuse and poor conservation.

Nowadays, ranchers are responsible for the stewardship of the land they rent and its ecological health. Last month I spent a week in Colorado documenting a modern example of a successful ranching operation, which cares about just that.

Steve Pargin, a third generation rancher, is dedicated to using the land he leases sustainably in order to maximise its use to raise cattle.

Several times a year, he and a crew led by his head cowboy, David Thompson, herd cattle from mountain range to mountain range, preventing them from damaging fragile ecosystems by grazing there too long.

When the land is well preserved it benefits everybody – the livestock, the local wildlife and anyone who wants to hike through the landscape.

In this rough terrain, however, it takes a special breed of cowboy to find and move the cattle. At the heart of Pargin’s operation stands cowboy David Thompson, who spends months out of his year making sure that the cattle are where they are supposed to be, and that they remain healthy.

Thompson helps to gather and move the livestock, spending his summers living in the mountains, where he monitors the herd until the crew comes back in the fall to reverse the process.

Work often begins before sunrise, when it is time to feed livestock, fix irrigation ditches, or prepare horses for the day’s ride.

During the time I spent shooting this story, Thompson saddled up a horse and headed to join Pargin and others as they gathered and moved several hundred head of cattle and their calves to summer pasture. It was always a long day’s work – sometimes stretching to sunset.

The land here is mountainous, dry and covered with oak brush that grows in rigid thickets of small scrubby trees. In this rugged landscape, cowboys need leather chaps to keep the brush from ripping into the flesh of their legs.

It takes several days to gather as many of the cattle as possible and another full day to move them across a busy highway into the new season’s pasture - a challenge for even the most experienced riders.

As the cattle arrive and wander off into the tall grass of a well-rested range, they remain blissfully unaware of the effort that the men and women on horses have spent making sure that the land around them remains healthy and thriving. 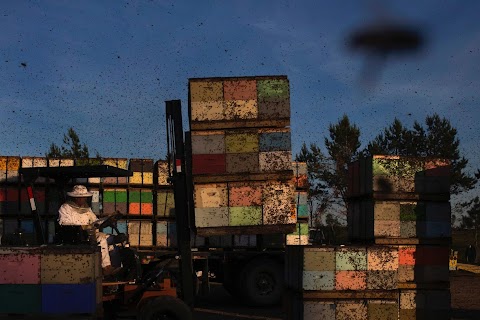 Pollination of the nation