For Reuters photographer Lawrence Bryant, the events of last Sunday in St. Louis, Missouri, will make him extra vigilant the next time he goes out to cover anti-racism protests that are sweeping the United States.

In a series of dramatic pictures, Bryant captured a couple exiting their mansion carrying firearms which they waved towards the crowd, as they confronted demonstrators making their way to the mayor's home nearby to demand her resignation.

The images, taken at close range, have featured prominently on news websites and in newspapers since they were taken.

Calls to phone numbers listed for the couple went unanswered, and their lawyer declined to make them available for an interview.

Kimberly Gardner, the city's chief prosecutor, said she was alarmed by the videos and that her office was investigating.

"We must protect the right to peacefully protest, and any attempt to chill it through intimidation or threat of deadly force will not be tolerated," she said in a statement.

The St. Louis confrontation has taken on added significance after President Donald Trump, who has already been accused by critics of stoking racial tensions in America, retweeted an ABC News video of the incident. He made no comment.

Bryant said he was pleased with the pictures he took.

On the one hand, he would have liked a longer lens to be able to zoom in on the man and the woman. On the other, the fact that he only had one camera with him meant he captured not just the McCloskeys, but also the protesters around them.

"A lot of the photos out there focus on them holding the guns, but to me that's not telling the whole story," he said.

"I wanted to show there were people protesting peacefully and they came to engage them." 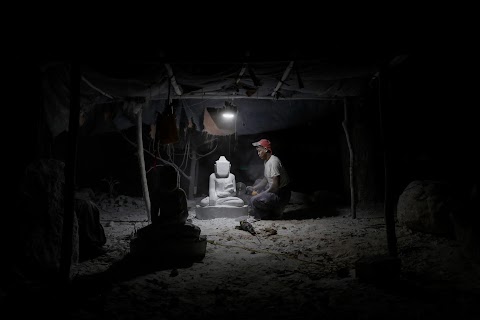 From statues to toothpaste, the Myanmar village 'blessed' with marble bounty

"How many people are going to die?" - COVID-19 races up the Amazon