With his face hidden behind a camouflage balaclava and an assault rifle slung over his shoulder, "Hunter" looks like other separatist fighters in eastern Ukraine.

What distinguishes him from his brothers in arms in the Vostok (East) battalion, an irregular pro-Russian militia fighting government forces, is his nationality. "I'm an American. I joined an independence movement," said Hunter, flashing a U.S. passport as proof.

"I hoped that both sides would respect the recently agreed ceasefire."

He stood beside a jeep, wearing the Russian army’s tight, black boots and trousers, that most of the insurgents wear, and a green military jumper. A small compass and large hunting knife in a sheath hung on his belt, an AK47 was slung over his shoulder. He looked straight at me through a balaclava. As I approached, he seemed to get bigger and bigger.

I was in Ukraine again, where the West and Russia have taken opposing sides in a separatist war with the pro-Russians in the East.

I had heard a few weeks before that the pro-Russian Vostok battalion had an American siding with the insurgents. Our team had repeatedly tried to get permission to do a story about him but we hadn’t had any success. However, during an assignment in Donetsk, I finally met the right people to allow me access on the condition that I would only take still pictures and not film him.

“Of course!” he said. “They told me you’d be coming. My name is Hunter; I can’t tell you any more than that.”

I was chatting to Hunter when an insurgent commander told us it was time to go.

“To the frontline, of course.”

It was an answer I hadn’t expected. In the back of the jeep I sat between Hunter and another journalist. The commander drove through muddy fields on the edge of a small town called Yasynuvata, not far from Donetsk. After a few bumpy kilometres, Hunter told me he knew the area because he’d recently dug trenches here.

We finally arrived at a small, improvised base in a wood, surrounded by trenches and bunkers on all sides.

“Look left,” said Hunter. The Ukrainian army couldn’t have been more than 1.5 km away – too far for a sniper, but mortars could easily hit us. I hoped that both sides would respect the recently agreed ceasefire.

“So tell me, how come an American is fighting on this side? Don’t you guys support Ukraine and the government?” That’s what I was interested in most of all.

“Know what, I’m a U.S. army veteran,” he replied. “But that doesn’t mean I agree with what my government says. I think the majority of veterans don’t support the government. Reading the news at the end of April, I simply understood what was going on here and decided to come and help these people in their fight.”

“I think their demand to secede from Ukraine is completely legitimate. A few months later I managed to come and since then I’m here.”

“And how did you get here? You just turned up?” I asked.

“Exactly! Though the rebels arrested me straight away,” he said. “Several groups questioned me; they wanted to make sure I’d really come to fight on their side and that my story added up. The next day they gave me a rifle and I joined the Vostok battalion.”

“And how do you communicate? I guess you don’t speak Russian?”

“Are they surprised when they see you?” I asked.

“The younger ones, no; usually they say, ‘What’s up dude?’ The older ones look at me a bit suspiciously.”

In the background, a Russian flag unfurled over a tent. I asked Hunter if he would mind me photographing him next to the flag. I was surprised when he refused. He told me he wouldn’t want anyone to think that he was fighting for the Russian government, but if I could find a flag of Novorossiya, he’d be happy to pose.

“You know, that flag is almost identical to our Confederate flag, only without the 13 stars,” he said.

Unfortunately, in the small base they didn’t have the Novorossiya flag, but they found the flag of their battalion, with which I photographed Hunter.

At the end, I asked him: “You’re sure you’re not just a Russian with an American passport?”

“Of course not. I’m 100 percent American, you can be sure of that. My family came to America from Western Europe about 200 years ago and we’ve been there ever since.”

“So you watch average TV shows and eat average fast food?” I joked with him.

“TV, no. Not since university. But I love burgers!”

“Of course! They’re great,” he responded. “It’s just a shame you can only get them in urban areas.” 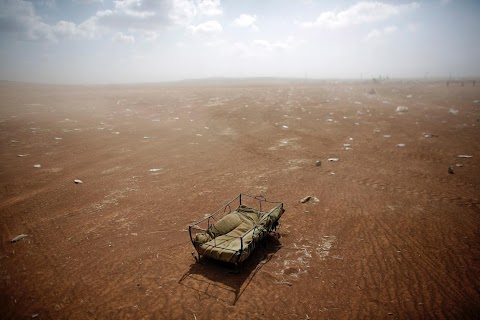 Abandoned on the border