Many of the poignant images by Romanian photographer Costica Acsinte could have been lost in the sands of time, but thanks to a local museum and the help of a diligent volunteer named Cezar Popescu, they are now being preserved and shared across the world.

Acsinte lived from 1897 to 1984 and documented more than half a century of life in Romania. His original images have deteriorated badly, but Popescu is now helping digitise many of them to save Acsinte's work for posterity.

"I wanted to find somebody from Acsinte’s pictures who is still alive today."

Romania is proud to have produced a man thought by many to be the world’s first war photographer – Carol Popp de Szathmary, from the city of Cluj, who took photographs of the Crimean War in the 1850s.

One of the most impressive people to have followed in his footsteps is Costica Acsinte, another Romanian who worked as a photographer during the First World War.

Although I don’t usually spend that much time on social networks, it was on Facebook that I first came across Acsinte’s works.

The photos I saw were black and white, mostly portraits, but there were also pictures of troops from World War I and a few landscapes. I started to dig around and I discovered an amazing history behind these old, much deteriorated pictures, many of them captured on glass plates.

Costica Acsinte, who made the images, was born in 1897 and worked as an army photographer. He then had a small studio in the city of Slobozia – thought to be the only one to exist there when it first opened.

He died in 1984 and was still taking pictures in his old age. At the beginning of his career, Acsinte took pictures on glass plates and then moved on to celluloid plates or films.

Documenting more than 50 years of life in Romania, his archive is most impressive. But it was also kept in very bad conditions, so when many of his photos came into the possession of the Ialomita County Museum after his death, the damage had already been done.

A few months ago, however, an enthusiastic local photographer named Cezar Popescu offered his help as a volunteer to digitise this archive.

He started an impressive race against time to save the old images, which were deteriorating more and more.

Piece by piece, Popescu now cleans the plates and scans them to create a high-definition digital version, adding each one to a database with as much accompanying information as he can find.

A lot of the originals cannot be saved because the photographic gelatine has been erased from its support or the dirt and scratches make the images impossible to scan. Popescu often digitizes about 30 pictures each day, and the hardest part of the process is cleaning the originals.

At the end of the day, Popescu adds the images, which are in the public domain and no longer protected by copyright, to the pages he created for Acsinte’s archive on social media platforms like Facebook, Flickr and Twitter.

It was a hard task, as Acsinte didn’t leave much information about his subjects, besides a few remarks on the back of a couple of prints.

However, Popescu did discover an image showing a monastery, the only building from Acsinte’s pictures that still seems to be in Slobozia. I took a photo of it with Popescu in one corner holding a print of the old picture.

Fortunately for me, ordinary people have started to give Popescu their own personal pictures taken by Acsinte to be digitised. In one case, we found somebody from a picture of his who is still alive – a woman named Marioara Paslaru.

I tried to take the same picture that Acsinte did all those years ago of Paslaru. In the end though, I preferred to take a candid image of her holding the old picture in her hands.

Nowadays, Acsinte’s reputation as a photographer is starting to spread. Slobozia is hoping that the fame of the old images will help boost the city as a tourist attraction - they have even put a huge billboard of Acsinte’s pictures on the county library’s wall for all to see. 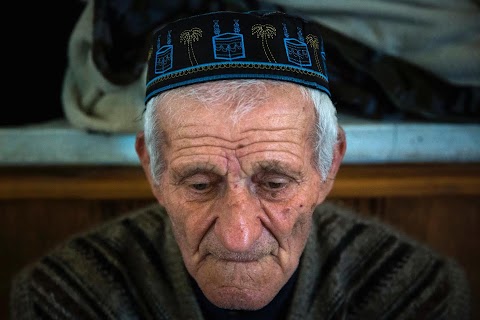 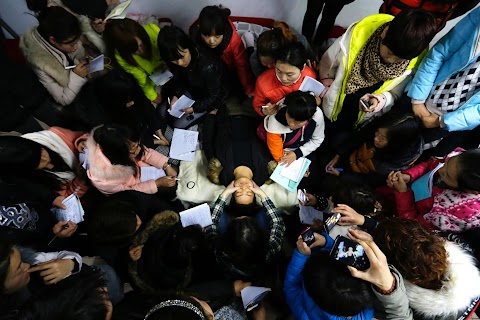 Making it as a masseuse