8-year-old Ramadinah lives in the shadow of Mount Sinabung with her mother, brother and 60-year-old grandmother.

When the volcano started rumbling, the family fled, leaving everything behind including their cow and their pet cat. They moved to a temporary camp for displaced people.

On the morning of June 24, the family had returned to their village for the day so 32-year-old Nurheni Ginting could work in the family's aubergine fields.

“It was really scary, hearing all those rumbling sounds coming from the mountain again,” she said.

"If I don't have money, I go to pick vegetables and sell them at market,” said Ginting. “I need money to pay for school, for food, for transportation.”

They were due to return to the camp at 6pm. But at around 3.30pm they heard a familiar sound coming from the mountain.

So they and others ran to the public bus to return to a temporary camp for those displaced by the volcano’s eruption at Simpang Empat, about 15 kilometres away.

The family, including Ramadinah’s 13-year-old brother, waited for other villagers to join them in the bus as ash spewed from the volcano.

"I felt sad as we drove away, especially as Ramadinah was crying and upset"

All their neighbours also had to flee the village earlier in June, except for a few men who stayed behind to guard houses from theft. The family’s home was undamaged and they were able to return from time to time to keep an eye on it.

“As we drove away Ramadinah just sat looking out of the window,” her mother said. “She was quiet and wasn’t talking.”

This was the family’s third time in the camp. The first was from September 2013 for about 10 months, then again from June last year for as long again. After only a few months back in their village, a government order came to evacuate the area.

When the volcano erupted in early 2014 it killed at least 11 people. The government evacuated tens of thousands of local residents.

Ginting said her daughter had now begun to grasp the danger presented by the volcano and its proximity to their village.

“She has recently begun to understand that the volcano can erupt anytime,” her mother said.

"After a few villagers died after being hit by lava last year, Ramadinah began to see what could happen."

Repeated exposure to life in the camp hadn’t improved the mother’s opinion of the difficult conditions there.

“You have to sleep in a big hall full of people,” she said. “Someone is always talking and occasionally there are arguments. At times there’s noisy music playing. It’s impossible to sleep well.”

The family faced a frustrating wait in the camp, she said, far from their source of livelihood.

“For now we just have to sit and wait. I hope this situation ends soon and we can go home for good and live like we did before.” 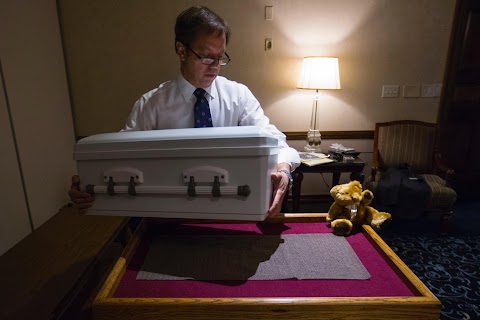 Rest in His Arms