Marooned victims grab the sidebars of a hovering army helicopter during the devastating floods that hit Pakistan in 2010, killing some 2000 people, leaving 11 million homeless and affecting the lives of another 7 million.

Before: Stranded victims reach for the sidebars of the army helicopter that arrived to distribute food supplies near the city of Kot Adu in southern Punjab's Muzaffargarh district.
After: Allah Dita, who can be seen in the previous image wearing a white scarf, managed to cling on to the helicopter and be pulled up to safety. He had stayed behind in the flooded village to look after his house and livestock, but was rescued and reunited with his five children who had left a few days earlier. Here Dita stands with Mohammed Farhan and other residents from the village, in the same area that he had escaped from the year before. "All I was thinking was to save my life. To get out," said Dita.

Before: Four-year-old Inamullah sits amongst furniture and household items recovered in his family courtyard, hours after they returned to their home as flood waters started receding.
After: Almost one year later, Inamullah sits in the same courtyard. "I remember the water, it took my toys. I miss them the most," he said. Ikramullah, the boy's father, says his son still feels the effect of the deluge: "He's the most confident amongst his peers. But when it starts to rain, he cries in fear of another flood.” The 25 members of their family survived the disaster by taking refuge on a nearby hilltop.

Before: Ikramullah, 37, returned home after the flood receded to find his livestock dead. The 25 members of his family survived the disaster by taking refuge on a nearby hilltop.
After: Nearly one year on, Ikramullah squats in front of the same brick wall and pen. "Look at my calloused hands, I have been forced into labor,” he said. "Businesses have shut down, there is no work here."

"As the helicopter came down to land, dozens of men and boys started to charge"

A week after they began, unleashing one of the biggest humanitarian crises in decades, the Pakistan floods had spread to submerge areas of southern Punjab province, leaving a trail of death and damaged infrastructure in their wake, and an uncertain future in the north of the country. As the flood waters ravaged villages and towns along the Indus River basin, I too followed their path of destruction.

After spending days wading through flood waters to tell the story, I arrived in Multan on August 6 in hopes of getting a seat on a chopper taking part in relief efforts. My goal was to bring light to the vast stretches of land the floods had covered, the same areas that made U.N. Secretary-General Ban Ki-Moon declare the Pakistan floods were the worst disaster he had ever seen.

On the morning of August 7, I was granted a seat on an army helicopter that was to deliver relief supplies to flooded villages in the Muzaffargarh district of Punjab. After loading the chopper with packets of cooked rice mixed with chickpeas, the crew and a handful of journalists departed in search of marooned villagers. We soon spotted families taking refuge in a cemetery, the only landmass in the area above water. As the helicopter came down to land, dozens of men and boys started to charge, forcing the pilots to hover over the crowd.

As the doors to the helicopter opened to distribute food supplies, I saw my chance for a different angle and took a step back before leaping past the crewmen and jumped meters below onto the ground. I knew I had as much time to document the reality of the moment as it would take the crewmen to distribute the relief supplies they had brought. Tripping over mounds and gravestones, I managed to get enough distance from the helicopter to show dozens of hands reaching into the air to catch food rations being thrown down.

Seconds later, I fought the dust and the force from the propellers to get back under the belly of the hovering craft and capture images of villagers hanging onto the skids in hopes of being rescued. After capturing an image that showed their desperation, I went behind the crowd to make eye contact with the crewmen, letting them know I wanted to get back on before they departed. After getting the visual go-ahead to return, I raced towards the doorways and with the help of a villager, hurdled over the crowd before being pulled up single-handedly by a crewman.

As the helicopter started to take off, the elderly man in my earlier photograph, with a white scarf around his neck, managed to hang on and was pulled to safety. 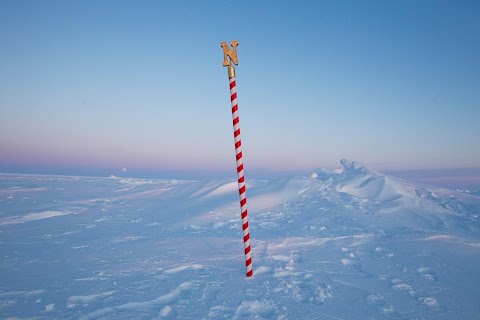 Base at the end of the earth 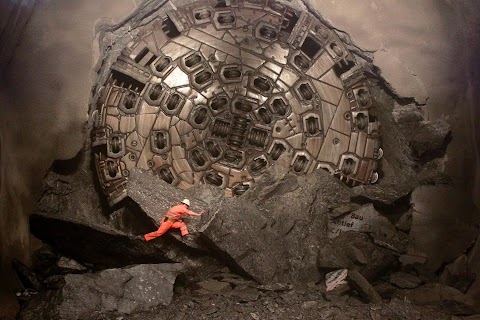