A forensic scientist uses a sharp knife as he carries out a delicate task: helping to resurrect euros that were all but destroyed in Germany’s recent floods.

This expert is one of a 13-member money-analysing team which works at a laboratory of the German federal bank, and specialises in reconstructing damaged banknotes.

"Obviously, a lot of Germans do not really trust the safes of their banks and hide money in private places."

When heavy floods hit parts of eastern and southern Germany two months ago, a few forensic scientists sitting hundreds of miles away in their dry office in Mainz knew there would be a deluge coming their way as well. It wouldn’t be that wet, nor that destructive, but it would also be massive.

The 13 men and women are members of the money-analysing team of Germany’s Federal reserve, Deutsche Bundesbank, specialising in reconstructing damaged or destroyed bank notes. Experience from previous floods told them there would be thousands of notes found in private basements, flooded bank safes or cash machines, which would need to be reconstructed.

Once these notes have been verified, the Bundesbank transfers the money back to their owners’ accounts, while the damaged notes are burned. At least 50 percent of a note is needed, but even with less the experts are able to reconstruct the bills.

Obviously, a lot of Germans do not really trust the safes of their banks and hide money in private places – buried in their gardens, underneath wine shelves or (very innovative) in their mattresses. Within eight weeks of the flood, more than 100,000 notes, worth over 3 million euros, were sent to the analysing laboratory in Mainz.

The experts work in a team of two in a small laboratory under a special air-cleaning table to make sure that mould or other fungi does not effect their health. When the damaged and sticky bills arrive, they carefully try to separate them with very thin, sharp knifes and reconstruct them note by note.

In the special cases I was allowed to observe, the scientists Frank H. and Uwe H. were looking into several thousand euros sent in by a private citizen from Bavaria who had a nest egg in her basement.

It took hours to go through several hundred bank notes ranging in value from 5 to 500 euros. Each one needed to be checked under the four-eye principle and the reconstructed money was then sealed and vacuum-packed before being finally destroyed after its value had been refunded.

It’s not just “drowned” money that can be “rescued”. The “money CSI team” also check partially burned notes or money which has been damaged by mice or rats.

I could not believe the stories they told me about where people find money and what happened to it after it was forgotten. The real facts and figures hit me hard. In 2012 the experts analysed more than 840,000 notes worth some 32 million euros. They still get notes to check from the old German currency, the D-Mark, which is often found by heirs in mattresses or even the chimney of a fireplace.

The Bundesbank is actually still “missing” more than 30 billion D-Mark. As the bank continues to convert the old currency into euros, experts are quite often needed to assess whether the money is genuine – making some people unexpectedly rich, without even playing the lottery! 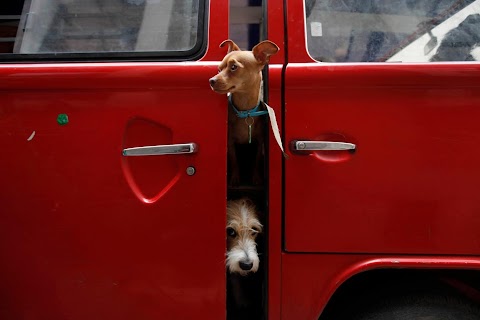 The Queen of Heaven jail