Reuters photographers captured the human drama in the most compelling stories of 2018, including desperate Honduran migrants confronted by Mexican riot police, wounded protesters at the Gaza border, Syria war victims rescued from rubble and pile-on victory celebrations at the World Cup in Russia.

This feature showcases some of the standout Reuters images of the year along with blow-by-blow descriptions of how they came to pass from the men and women behind the camera.

Leah Millis: "This was one of my very first stakeouts after I joined Reuters as a staff photographer in Washington, D.C. After an earlier assignment at the Supreme Court on Feb. 27, I was asked to join colleague Kevin Lamarque at the Capitol, where White House Communications Director Hope Hicks had been testifying to the House Intelligence Committee.

After about seven hours of waiting, Hicks suddenly appeared at the end of the hallway. I grabbed my backpack and broke into a sprint towards the northern exit with a videographer and no other photographers.

We then back pedalled with Hicks for the long walk up the stairs that lead to First Street from the Capitol. I noticed the lit-up Capitol building behind her as we climbed the stairs and had the presence of mind to get it in the background of the photograph.

When we reached the top of the steps, Hicks and her team hailed a taxi, got in and they were off. Seven hours of waiting had culminated in a few minutes-long feverish dash and climb up the stairs. Hicks and myself were the only women at the scene.

One of the videographers made a comment about her looks as we were walking, and I felt the need to show that she held her own, never stumbled or looked like a victim in that situation.

Moments like these transcend barriers. I'm a photojournalist and she was my subject in that situation. But, in that moment, I could relate to her from one woman to another."

Kim Kyung-Hoon: "After nearly two weeks of documenting the harrowing journey of a caravan of mostly Central American migrants headed towards the U.S.-Mexican border, I snapped a picture I will never forget.

In the photo, Honduran mother Maria Meza grabs the thin arms of her two 5-year-old twin daughters Cheili and Saira as they frantically run from a tear gas canister next to the U.S-Mexico border barrier in Tijuana. Cheili is in diapers, Saira barefoot.

Their mother is wearing a T-shirt from the Disney hit "Frozen," a movie I've seen many times with my own daughter.

In the frantic moments after tear gas canisters hit the ground, the acrid smell engulfed the area. Children were crying, their eyes stung by the gas.

The U.S. government said customs officers had used tear gas to stop a group of migrants who, they said, had violently attempted to cross the border.

I did not see who fired the canister, but I heard the sound come from the direction of the border fence as I, too, broke into a run.

It was one of the first of several tear gas canisters I saw being used by border agents. I did not witness migrants behaving violently, but we were in a large area and I could not see everything that was happening.

It is not my place to say who is right and who is wrong. I just took a photo of what I saw happening in a given place and time."

For part one of A Picture and its Story 2018 click here. 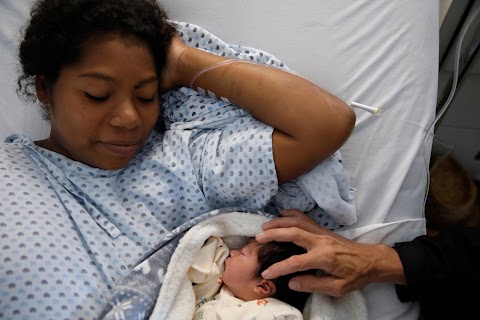 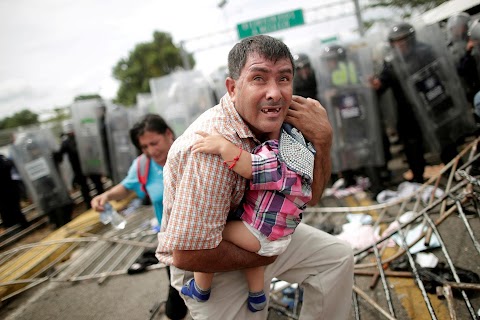