Rockets killed more than 10 civilians and soldiers in the town of Kramatorsk, deep in Ukrainian government-held territory, as part of a rebel offensive that came on the eve scheduled peace talks.

Reuters photographer Gleb Garanich saw the body of a woman who had been killed, laid out in light snow where she fell. The tail of a rocket stuck out of a small crater in the ground.

"By shooting this picture I wanted to convey the banality of the horror happening here."

I was with the Reuters TV crew and we were coming back from frontline in the vicinity of Debaltseve when a crew member, Sergey, saw a tweet saying Kramatorsk was being shelled so we headed there.

We got to the site of the shelling in less than an hour after the explosion. The first thing we saw was a dead woman’s body lying on the ground, she had been like that for at least half an hour. By shooting this picture I wanted to convey the banality of the horror happening here.

The locals were just walking by, rarely reacting to what was going on. Someone later came by and brought a cloth to cover her body.

Her husband then showed up. He had been looking for her, calling home, but he could not find her. He went home and did not find her there either, that is when he made his way to where we were and saw her on the ground.

He was looking for an ambulance, a police car, anybody who would be able to take her body. I don’t know what happened later as we had to leave to shoot other damaged spots and more casualties.

We were there for 45 minutes and for the first half hour we experienced no trouble at all from either locals or officials but later it became challenging. The people there can be aggressive towards journalists. This happens practically everywhere, especially wherever there is shelling or shooting, wherever people are underground, without food, they get angry.

They are always giving instructions. “Don’t photograph here, photograph there.”

“Where were you when they were shooting at us?” they ask.

I find it challenging to cover a war in my own country. I was born in Russia; my wife is from western Ukraine. My children speak both languages. I would have never imagined that one day there would be a war here. Nigeria: Voice of the people 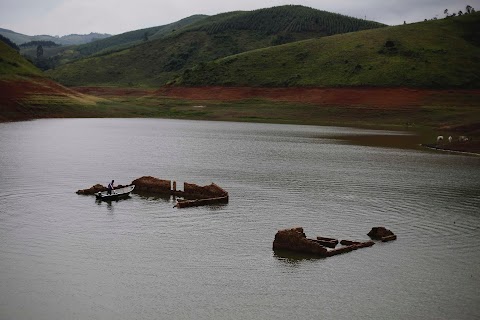 Revealed from the depths