Rows upon rows of newly manufactured Ford Fiestas stand packed aboard a ship taking them from the Ford factory in Cologne, Germany, to the Dutch seaport of Vlissingen.

Reuters photographer Wolfgang Rattay documented the journey aboard this huge vessel, as it carried around $11 million worth of cargo down one of Europe’s major water transport routes - the river Rhine.

Before: The upper deck of the transport ship "Tossa" stands empty before being loaded with newly built Ford Fiestas at the factory dock in Cologne.
After: The freshly manufactured cars pack the deck of the ship.

"It was spectacular to see the lights of the cities of Leverkusen, Duesseldorf and Duisburg pass by and I did not sleep all night."

I must admit, I hadn’t really planned on this story being anything like the way it finally turned out – “A Journey down the Rhine”. My original project was to shoot a series of images of the production of a car, from the first screw being fitted, to the happy new owner turning the key in the ignition and driving away from the showroom.

I made initial enquiries, and although the media offices of large firms can be very restrictive, with the help of an old contact I was able to gain access to the Ford factory in Cologne. I was full of beans after clearing security, but once inside, it turned out that my expectations and the reality of the situation did not match at all.

I had hoped to be able to install a camera inside a car and follow the whole production line from start to finish. Nothing like that was possible. The risk of jeopardising the strictly controlled assembly process was too high; the engineers and workers at the plant would roast me over an open fire if I accidentally brought their system to a halt!

Furthermore, Germany’s labour and security restrictions make photography in this environment difficult. Fort Knox is a piece of cake compared to the paint shop of a car factory.

But this isn’t a story of disappointment. During a lunch break, the media officer who helped me out mentioned that a third of the factory’s daily production of some 1,800 Fiestas was being loaded onto a ship at a nearby harbour.

One sleepless night later, I had an idea and called this media official, asking whether it would be possible to travel with the ship as it made its way down one of Europe’s most frequented waterways to transport the newly assembled Fiestas to their destination at a seaport.

The ship is not Ford’s property – it belongs to a Dutch shipping company, Interrijn B.V., which specialises in this type of mass transportation. I’d expected the Dutch employees to be obliging, but Ellen, the secretary of the shipping firm, and the two captains Benno and Gerrit were much more than that.

They were extremely friendly, outstandingly straightforward, openhearted and helpful. Their hospitality knew no borders and they were happy for me to travel with them. Ellen did give me a warning though: “just bring a few books, since 24 hours on board will be dreadfully boring.”

Fortune is fickle most of the time, but from this moment on, it was on my side.

On the morning of September 12, I cleared security at the plant to meet with the ship’s owner and then the 32-year-old captain, Benno van Ooyen. I installed two cameras (one Canon 1DX with a 16-35mm lens, and one 5D Mark III with a 15mm fisheye lens) on a rail in front of the driver’s cabin. Both cameras were set on interval mode, shooting a single frame per minute.

As I went back to the factory to shoot some other pictures, my cameras were running smoothly on board the ship “Tossa”. Then, around midnight, Benno called and told me that the loading would soon be finished and that he was planning to leave at around one o’clock in the morning. I rushed back to the harbour.

When all the newly built cars were safely parked on the four decks of “Tossa”, the two captains and I parked our own cars in the very last free corner of the cargo ship.

We cast-off at 1 a.m. and headed towards Vlissingen, in the Netherlands, the start of a day’s journey with a load worth nearly 8 million euros (around $11 million). It was spectacular to see the lights of the cities of Leverkusen, Duesseldorf and Duisburg pass by and I did not sleep all night.

To cut a long story short, during the 26 hours it took to make the almost 300 km (186 mile) trip, I was busy all the time. Busy changing the batteries in my cameras, busy downloading memory cards to my laptop, super busy cleaning the lenses after fog and heavy rain came down later that day and lasted almost the whole the trip. There wasn’t much time to take a nap.

Later on, I was busy pestering the two captains, who both did six-hour shifts, with hundreds of questions about the boat, Rhine shipping in general, navigation and anything else.

I always thought I had an interesting and challenging job working as a news photographer for an international agency. But cruising down the Rhine with two 3000 horsepower engines is as challenging as it gets. You are constantly working and have to be alert at all times to safely steer a 110 meter (360 foot) long vessel with its load of 550 brand new cars.

For me, being aboard the boat was not boring at all - I had no time to follow Ellen’s advice and read a book. I barely had time to doze! The journey down the Rhine was a great pleasure and an unforgettable experience. 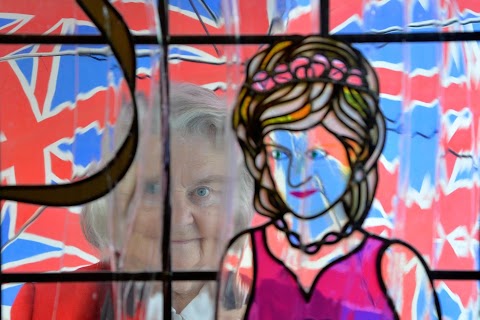 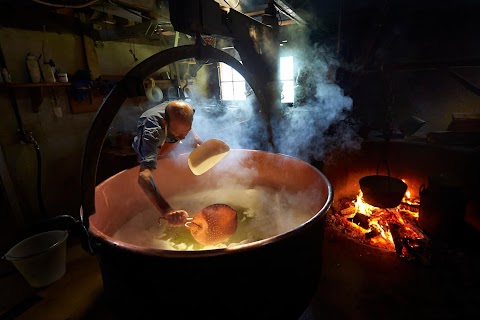