This is no ordinary insect. This is a tiny wrestler, primed to battle his opponents and win glory for his trainer in the traditional Chinese sport of cricket fighting.

Similar to cockfighting but without the blood, the contests put two crickets into a ring the size of a shoebox to determine which is the more aggressive. The reputations of the owners, and sometimes sizeable under-the-table bets, can ride on tussles between these little fighters.

"For Man Zhiguo, crickets are his life. The background on his mobile phone is a picture of a cricket and the ringtone is the chirping of a cricket."

One late summer’s day in Beijing, while roaming through the narrow alleyways of an old pet market, I heard the chirping of insects. As it grew louder and louder, my curiosity led me to an alley, where I found huge numbers of the little animals in birdcages and small jars. They were on sale, and waiting for their new owners.

According to an expert in the field, keeping crickets as singing pets is an old Chinese tradition, which dates back more than 3,200 years. Unlike some countries, where people treat crickets with disdain and repel them with bug spray, in China the chirping of crickets has traditionally been regarded as beautiful music.

For me, even more interesting than the singing crickets in little cages were the men observing the hundreds of small jars with very serious faces. The creatures in these jars were brown crickets, and the men looking at them were searching for little gladiators to bring them the glory of victory in cricket fights.

Cricket fight lovers say that this sport has more than 1,000 years of history in China, and that there are many Chinese who still enjoy this ancient tradition every year in August through October.

Cricket fighting sounds like kid’s stuff, but this is really a serious sport for those who spend a lot of time and money to care for the creatures. Cricket fighting begins with breeding and training and committed trainers often purchase more than a dozen at a time, hoping to find champion fighters.

Only male crickets raised in the wild can be chosen to tussle in the transparent oval-shaped rings, and those from Shandong Province are regarded as the best fighting breed.

Man Zhiguo, who has enjoyed this hobby for the last forty years, is a good example of an avid cricket-fighting buff. This season he maintained an army of about 70 crickets in a special room of his house. A picture of Hongyaqing (meaning “a black cricket with two red teeth”), his favourite and the winner of the 2004 National Cricket Fighting Championship, is hung proudly on display.

As soon as his truck-driving job is done in the afternoon, he begins another busy routine in the cricket room. He has to feed his fighters with special meals he invented. He also gives them showers and fight training. His crickets are kept in special jars equipped with a bed, feeder and a water bucket. He also does not forget to mate his warriors with female crickets as he believes it helps the male fighters relax before a bout.

After his daily routine, he spends the rest of his time observing and selecting the best ones by looking at their colour, listening to their singing and watching their movements. Only experienced handlers are equipped to do this, he says.

Such special care for his crickets costs about 10,000 RMB ($1,600) a month and 4-5 hours a day. For Man Zhiguo, crickets are his life. The background on his mobile phone is a picture of a cricket and the ringtone is the chirping of a cricket.

He buries his important crickets in a piece of land near his house, which he designates as their graveyard. It is amazing that he invests all this time, energy and money in an insect that lives only about 100 days.

He is not the only person in China who has so much enthusiasm for the little beasts. Every year, 25 major cities have regional cricket fighting championships and winners advance to the national championship in Beijing. This tournament appears to be more serious an event than any other fighting sport in China.

Crickets are divided by weight class after rigid and accurate weighing and their tournaments are organised by draw. The match is presided over by the sharp eyes of the judges.

In a fighting container, handlers stimulate their crickets’ whiskers using a straw stick to make the insects annoyed and aggressive until they reveal their tough teeth, shaped like hooks.

When both crickets are in the mood for a fight, a small panel separating the insects is lifted and their fierce battle begins. The fighting lasts just a few seconds and the winner and loser is determined by which cricket starts to run away or stops chirping.

There are many reasons why so many Chinese are enthusiastic about this tradition. A young person who was cricket fighting with his friends on the street told me that it reminded him of old times when he played it with his grandfather as a boy.

Another person said when a fight begins and his crickets rub their wings singing their fighting song to challenge their opponent, he feels like he himself is going into the boxing ring.

Everyone has a different reason for following the sport. However, one thing seems clear. Even in the 21st century, cricket fighting in China is in no danger of dying out. 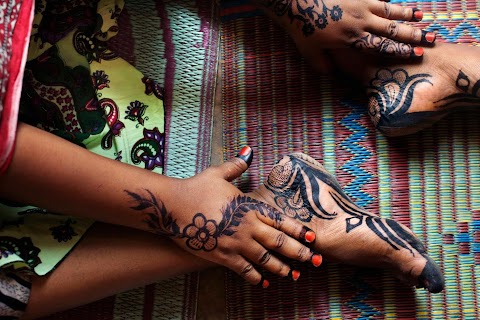 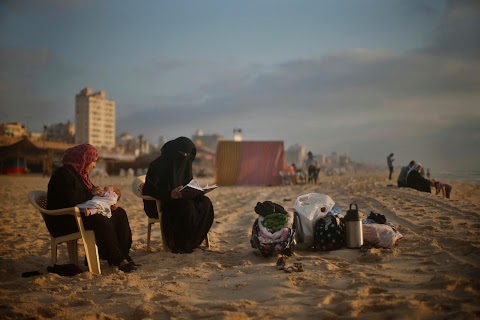 At the beach in Gaza City