Taking part in the potato harvest in this corner of south-eastern Spain is no easy task. It means getting up before the crack of dawn and helping load thousands of kilos of spuds into giant sacks before they are ruined by the heat of the day. The majority of locals are unwilling to perform the backbreaking work; most of those who do it come from Morocco and Ecuador. But now, as Spain wrestles with economic crisis, a few Spaniards are starting to consider jobs mostly done by immigrants during the boom years.

"Different fields every day, but always the same sight: row after row of round yellow potatoes waiting to be picked up."

The silence of a sleepy town and the flickering light of the street lamps greet Jorge Ibanez as he leaves his home before the crack of dawn in Pozo Estrecho, in the southeastern Spanish region of Cartagena, Murcia.

With his baseball hat on and a cooler in his hand, he approaches a couple of men on a corner. They exchange timid hellos and engage in conversation as they wait for the car that will drive them to a potato field ready to be harvested.

Ibanez is a 20-year-old Spanish day labourer. A pair of rotten gloves and his baseball hat are his work uniform, a group of Moroccan men his work companions. Together they set out every morning to collect thousands of kilos of potatoes that will end up in the kitchens of northern Europe.

Different fields every day, but always the same sight: row after row of round yellow potatoes waiting to be picked up. Tractors work at night unearthing the tubers so that the day labourers can start collecting them as soon as the sun rises.

Ibanez quit school at 16 to help out with money at home. He got a job in construction for a few months and went on to work for a truck company and a grocery store before returning to school to complete his secondary education. “I thought I would find a better job after getting my degree, but that didn’t happen. I couldn’t find anything, literally,” Ibanez says. Two months ago he decided to become a day labourer.

Even though he was born and raised in an area rooted in agriculture, the thought of working the fields for a living never crossed Ibanez’s mind. But the severity of the crisis and the lack of job prospects in a country with one of the highest youth unemployment rates in the Eurozone, well beyond 50 percent, have forced him and others to reluctantly accept the kind of job that only immigrants would take during Spain’s economic boom of the 90s.

A study by the Coordinator of Organisations of Farmers and Ranchers (COAG) shows that the number of young Spaniards asking for guidance to join the agricultural and livestock sector last year increased by 79 percent compared to the average of the previous five years.

But Spaniards like Ibanez are still a rare sight on the fields of Cartagena, Murcia, even if the trend is starting to change. “This job is incredibly strenuous. Many locals complain that the foreign labourers are responsible for dropping the wages because they are willing to work at very low prices. But the truth is that most Spaniards don’t want to do this type of work. We do it because we have no other choice,” Ibanez says.

Mustapha El-Mezroui didn’t feel like he had any other choice either when he decided to leave his native Morocco for Spain in the 1990s. The lack of prospects in his own country as well as news of the incipient economic boom in Spain convinced him to look for a better future here. But homelessness and hunger was all he found when he first arrived.

“I was forced to dig through trash to find food that other people discarded. Once I came across a leg of ham in the trash with some meat in it and I ate it. I was starved, what else could I do?” said El-Mezroui, a practicing Muslim, in the modest home he shares with his wife and three-year-old son at the farm where he works outside La Puebla, Cartagena.

Like Ibanez, El-Mezroui’s days start before the crack of dawn: by the time the morning light breaks, he is in the field, where two crews of day labourers and endless rows of potatoes await him. As the workers pour the contents of their baskets into the 1,250 kilo potato sacks, El-Mezroui checks that no good potatoes are left behind and closes the sacks before helping load them onto the trucks that will take this back-breaking cargo to Belgium and the Netherlands.

El-Mezroui knows potatoes almost as well as his employer, Santiago Perez. He began picking them at the end of the 90s as the demand for manpower in the fields of Cartagena grew, with traditional family farming in the region giving way to an agricultural industry with its production destined for European markets.

This transformation took place in the midst of Spain’s housing bubble, when many young Spaniards from the area were quitting school to work in the construction sector, where the pay was far better. “It’s very difficult to find a Spaniard willing to work on the field. Harvesting potatoes is extremely tough. Even now, with so many Spaniards unemployed, you barely run into anyone who’s willing to do this kind of job,” Spanish farmer Santiago Perez says.

El-Mezroui, like many other immigrants from Morocco and Ecuador, took the jobs no Spanish national seemed to want. He was an able, single man, willing to work from sunup to sundown to earn his keep. And so the fields became the basis of his living.

And they still are. Other than supervising the day labourers, he also does maintenance work at Perez’s farm, secures the fences around the property and keeps watch for thieves.

“I work hard here, but it pays off. Now I can provide for my family, there are many people who can’t do that these days in Spain,” El-Mezroui says.

Strike and struggle in Phnom Phen 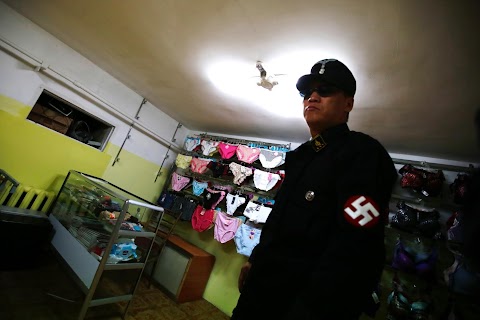