Flames light up the sky as they blaze at a palm oil plantation on the Indonesian island of Sumatra, where the illegal burning of land to clear space for oil palms is a recurring problem in the June to September dry season.

This year, the fires have been especially widespread and the consequences have been particularly bad, blanketing neighbouring Singapore and Malaysia with thick smog, in Southeast Asia’s worst air pollution crisis in 16 years.

Before: A row of Malaysian landmarks – the Melawati Palace, the prime minister’s office of Putra Perdana, and Putra Mosque – are all visible in the sunlight on June 17.
After: The same buildings are obscured by smog on June 24.

Before: Cranes stand above an apartment complex under construction in Singapore at 7:15 a.m. on May 15.
After: The same cranes are almost invisible through heavy pollution at the same time on June 18.

Before: The Marina Bay Sands stands against a blue sky on April 25.
After: The same view is dark and hazy on June 18.

"Outdoor areas that were usually bustling with activity were now mostly deserted. It was just like a ghost town."

As someone who has lived in Singapore all my life, haze is not unusual – it’s just a somewhat seasonal event, and one that I have become used to.

But last Monday was different. I woke up to a slightly smoky smell in the air, and the view outside my apartment was dimmer than usual. I checked Facebook and saw lots of friends working in the city had posted pictures of a very blurry skyline visible from their offices. Even the air in the subway and malls smelled of smoke, they remarked.

Immediately, I made my way to the business district to have a look. My first instinct was to get up to the rooftop of the Marina Bay Sands hotel – the best vantage point in the city. On the way up, a hotel staff member apologised to me in the elevator: “I am sorry for the view today”. He was right. From the observation deck, the haze was so thick that I could only see the outlines of the landmark buildings around me.

There, on the 57th floor, I couldn’t feel a breeze. It was very humid, my chest felt tight and I found it hard to breathe while carrying all my gear. But I needed that one picture showing a human element against the hazy skyline, and I knew I would find it at the poolside.

Normally, the pool is only accessible to hotel guests, so I had to wait to join one of the three scheduled daily tours, which are open to the public. I hung around two hours in the humidity before a guide came along and brought us in. “Take as many pictures as you want,” he said.

The problem was, it wasn’t exactly a tour of the pool. We were only allowed in a small, 20-yard stretch shared by at least 40 other tourists with cameras, and we only had about fifteen minutes to get a shot. Worse still, many of the hotel guests were suddenly getting out of the pool because of all the tourists looking at them. But I was lucky. Just before I was about to leave, a man began swimming in front of us…

In the days that followed, I started early every day to document people commuting to work in the deteriorating environment. To help protect myself as I spent about 8 to 10 hours on the streets every day, I kept an N95 mask on most of the time. Even so, every now and then when the air irritated my throat I would cough uncontrollably.

By Friday, the landscape in the city had changed dramatically. The beautiful glass facades of tall skyscrapers that normally gleam in the daylight were replaced by a landscape of dark, ominous silhouettes, which stood in the distance covered by smog that had turned slightly orange. Outdoor areas that were usually bustling with activity were now mostly deserted. It was just like a ghost town.

I walked around Marina Bay the day when the air quality was at its worst and captured a few memorable sights including the never-say-die tourists, posing with the Merlion statue and making the most of their holiday, with nothing else to be seen in the background. I was sure they would have stories to tell about Singapore when they got back home.

Two cleaners perched on the facade of the iconic ArtScience museum, like ants climbing on a jar of honey.

And then there was a jogger, whom I chased down to get a photo. I was on a call when he glided past me and I quickly put down the phone and took a quick shot of him from behind. Not willing to give up, I ran after him. After a good 150 yards of following with all my gear, I quickly overtook about 30 yards ahead of him to get into position and take a quick test shot.

As he ran past, I squeezed off 4 or 5 frames before sitting on the ground. I should have asked him for his name, but I was really too tired to chase him again. With the mask that I was wearing, it was too difficult to breathe, and that 200 yard dash really made me see stars.

Later, I went to a 7/11 store to buy a drink, and the cashier thought that I was going to pass out when she saw my fogged-up spectacles and dazed look.

Now, winds of change have blown the haze northwards. I feel a great sense of relief, my cough is gone and I have a greater appreciation of the cleaner air that I can breathe. But I wonder: when will the haze be back again? 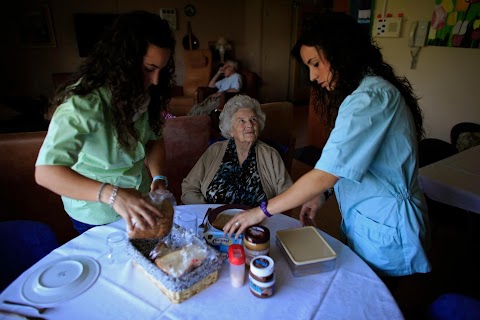 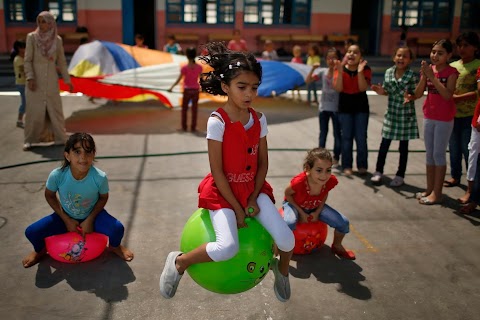 On holiday in Gaza's summer camps