As the capital of Hitler’s Third Reich, the Berlin of May 1945 existed only as a war zone: bombed-out streets, no gas or electricity, a daily fight for food. Everyday life had broken down. At night sirens howled to signal bomb attacks, driving citizens into shelters.

For months before, the allied forces had so intensified their aerial bombardment that most of Berlin, and Germany, lay in ruins. Berliners just tried to survive or flee.

Before: Russian soldiers walk near the Reichstag parliament building.
After: The Reichstag takes pride of place in modern-day Berlin.

While Hitler gave the order, “Berlin must not surrender”, as well as commands to protect fronts that no longer existed, the Red Army was invading from the East. It comprised 2.5 million soldiers, 6,250 tanks, 7,500 airplanes and 41,600 artillery units, all of which were used between April 20 and April 30 in the Battle for Berlin.

On May 2, Berlin capitulated, as the famous picture of soldiers hoisting the Russian flag on top of the Reichstag parliament building shows.

As these events near their 70th anniversary of the end of World War Two in Europe, I was tasked with a story to mark the end of the war. I like military history and went to the Military History Museum in Dresden, two hours south of Berlin, to research a “then and now” photo story.

In Dresden I came across pictures that a Russian army photographer took of Berlin as his battalions entered the city. He was a G. Samsonov, who I had never heard of. His pictures, however, are thrilling portrayals of Berlin: burning buildings, street patrols, soldiers fighting through the capital’s destruction and desolation. I had to find out more: about this colleague, his pictures and the story of their making.

Many questions arose. Where were those pictures taken? Do the buildings, streets and landmarks still exist? Who was G. Samsonov, what was his battalion? How did they move through Berlin? What camera and film did he use? Where did he stand to take the picture? Can the picture be recreated now, showing how the area has changed? Detective work took hold, and I threw myself into being a military Sherlock Holmes.

I found out that his photos became part of the Dresden archive in the 1980s. This ‘G. Samsonov’ sorted and labelled his collection before donating it to the then DDR’s Military History Museum on a visit to Dresden.

His captions didn’t say much about geography – beyond what the picture showed – so I had to place where ‘the bombed out street in Berlin’ was or “View on the Reichskanzlei (Reich Chancellery) 1945”.

With the help of online archives, Russian colleagues and the German-Russian Museum in Berlin I discovered that G. stood for Georgiy and that Samsonov was a photographer with either the 5th Shock Army under General Nikolai Berzarin or the 8th Guards Army, reporting for Izvestia or the Frontovaya Illustratsiya, major Russian news outlets then.

Maps of battalion routes gave me an insight into where he entered Berlin and helped me discover that most of his shooting focused on the Frankfurter Allee main road and its surroundings, as they passed from the north-east into the city centre. That at least gave me an area to explore: street names, landmarks…

I looked at specific aspects of Sansonov’s pictures: zoom in on street and shop names to place his movements; was a simple train barrier a clue? If there was a church tower, what was the church?

One time, after a few hours of research, I found out at 3am that the church I was seeking no longer existed, demolished after the war. A website on disappeared churches told me St. Lazarus in Grünberger Strasse near Frankfurter Allee had been too damaged to survive. Not much point looking for something that no longer existed – but how lucky to know, so I could recreate the same perspective today.

I also found a picture that shows Samsonov with his FED camera, a Soviet copy of the German-made Leica II. It was usual at the time to use this with black and white film on 18 DIN/50 ASA (referring to film speed). This gave me the idea to photograph not just the same images, but to use the same technology. The old, analogue way of taking pictures, without the comforts of modern digital photography. Thanks to Ebay I found and bought the exact same camera.

With locations and the camera, I started to capture Samsonov’s exact perspectives in modern-day Berlin. This wasn’t as easy as I thought: with streets renamed, renumbered or moved entirely, I had to stand in the middle of the road if I wanted the exact same perspective today. I had to compromise sometimes to get an approximate image, not the exact equivalent.

Other times, I was able to get the exact same view – and suddenly Samsonov was back. I could vividly imagine the war raging, with the sounds of shots from rifles and rocket launchers, dead people in the streets, troops trying to make their way through the centre of Hitler’s governmental district with the Reichstag building and his bunker at the Chancellery.

I’m a passionate photographer with my own memories of covering the war in Iraq and Afghanistan. I always marvelled at how, in the midst of total destruction and the naked fight for life in Berlin, photographers could find the courage to take pictures of the plight they witnessed.

I admire Samsonov for his portrayal of Berlin – a battalion’s moves in one of history’s key moments, it portrayed a city in a state it had never reached before and hopefully never will again. Pictures never lose their significance – even if it sometimes takes detective work and time travel to recreate them.

Photos are memories – of history, events, ourselves. Who will shoot the same images again, 70 years from now. And what will the images show?

Before: The Reichstag suffered the ravages of allied attacks.
After: Today’s Reichstag is a visitor attraction. 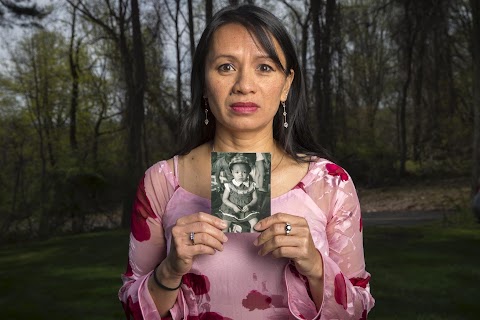