On the day of a second earthquake in Nepal, a little girl had plans of her own. Her mother Maya Tamang, 20, gave birth to the new arrival in a makeshift shelter at Bhaktapur hospital.

The quakes, the first about two weeks before the baby’s arrival, killed thousands and demolished more than half a million homes, most of them in rural areas cut off from emergency medical care.

Maya, her husband, Buddha Tamang and their daughter spent their first day together, surrounded by the family.

"I waited outside the shelter to hear the sound of a baby crying."

Maya was in pain on Monday 11 May, the night before the second earthquake. Her family members tried to help her give birth in her husband’s hometown, a village called Kavre, 3 hours from Bhaktapur, but they were not successful.

Many family members including her husband Buddha, travelled to the hospital in Bhaktapur, a town east of the capital Kathmandu, at about 10am on Tuesday May 12, before the earthquake struck.

After the earthquake hit, Maya was moved out to a temporary shelter in a compound of the hospital and waited there until the baby was born at about 6pm.

I was covering the aftermath of the 7.3 magnitude tremor. I ran around Kathmandu to see what was going on and went to somewhere where I thought there might be victims trapped inside collapsed buildings. I met my colleague Navesh Chitrakar and he told me that he heard from a local journalist that Bhaktapur might be more affected so I went.

I was in Bhaktapur by around 5:30pm. I moved around the old city and asked local residents if they knew of anybody with injuries or who might be trapped but mostly they did not know. So my fixer and I went to a hospital where I thought injured people might be taken.

We reached the hospital at about 5:45pm and I asked about injured people arriving. I was told most had already gone home because they had only minor injuries.

I walked around the hospital compound where there was a makeshift shelter for patients, some with earthquake injuries. It was here I met Maya who was in labour. My fixer asked permission to take some pictures and everyone said yes. I thought this could be a very good story about the earthquake.

“I was in pain and very worried about my baby and the earthquake,” said Maya, who comes from a village called Hetauda, south of Kathmandu.

I waited outside the shelter to hear the sound of a baby crying. I had only been waiting five minutes when I heard that cry. I stepped inside the shelter and just took three pictures of her…

This was my first time shooting this kind of picture and I was concerned not to be too intrusive. The three pictures were in focus and sharp and so I thought that was enough. I didn’t want to intrude on that moment of joy with her family.

After a nurse had cleaned the baby I had time to ask Maya a few basic questions for my caption. The baby girl doesn’t have a name yet.

Before I left I thanked Maya and all her family members for giving me permission to capture those images, even for just 1 or 2 seconds. I wish all the best to the baby, Maya, her husband Buddha and all their family. The moment of that little girl's birth will be the best memory in my life. 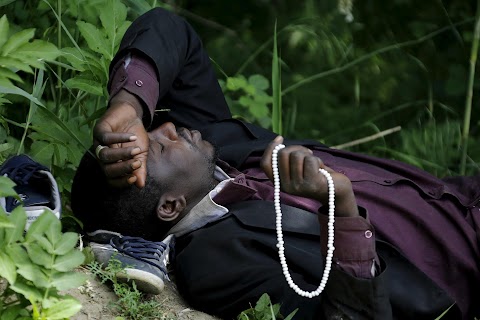 Walking to a new life 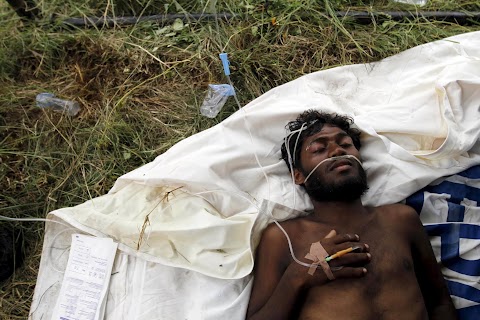 Plight of the Rohingya