The Galloo shipbreaking plant in Ghent, Europe's largest, processes some 35,000 tonnes of metal every year. It employs only about 30 staff, with most of the heavy work done by machines.

The European Union plans to impose strict new rules on how companies scrap old tankers and cruise liners, run aground and dismantled on beaches in South Asia.

"It's like stepping into another world, another scale, where I am dwarfed by heaps of scrap metal."

My first impression when I arrive at the shipbreaking site is a sense of being small.

It's like stepping into another world, another scale, where I am dwarfed by heaps of scrap metal the height of a ten-storey building.

Then there is the intensity of the site, with several teams working on a multitude of boats at the same time - producing a bewildering cacophony of drilling, cutting and sawing sounds.

It is all very photogenic. While one team cleans and empties a huge seismic research boat, a second cuts blocks from a barge, and a third one works on the ground to recycle dismantled parts.

Not far from there, a crane deals with a heap of scrap metal while another mechanical arm cuts huge pieces of steel.

I soon understand why we had to be escorted during our first visit here: for obvious reasons of security but also for our own safety. The activity on the site can be very dangerous and the access to several navy vessels was forbidden during asbestos removal.

Despite the high level of mechanisation and automation, employees still do manual labour in hazardous and toxic conditions, such as removing asbestos, to recycle 35,000 tons of steel a year.

The next day I am allowed to work without escorts. I wear a hard hat and a safety vest for visibility and protection, but in this extremely noisy environment I’d feel safer having eyes in the back of my head. 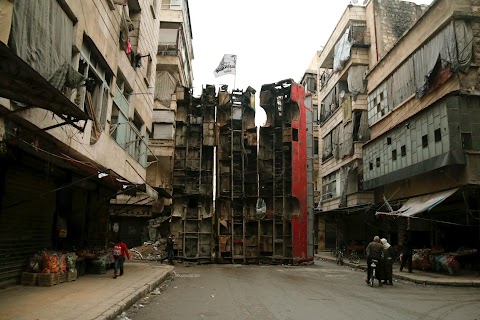 In the shadow of Syria's snipers