The bunker is now a museum that allows guests to experience something of life in the old communist state for themselves. Visitors can come and stay for a night, during which they don army uniforms and are treated as East German soldiers.

"A man dressed like a major appeared with a frightening look in his eyes and told us sternly to find the bunker."

One Saturday morning, I set out to travel back in time to a place in eastern Germany. I was going back to the era of the former German Democratic Republic (GDR), when Germany was two countries, with two different armies. I was going to the Bunker Museum in Rennsteighoehe, in the middle of the forests of Thuringia.

The museum is owned by the Waldhotel Rennsteighoehe, which offers visitors the chance to come there for a historical “reality experience”. This means spending the night in a bunker built by the Ministry of National Defence, wearing the uniform of the former communist National People's Army (NVA), and being treated like an East German soldier for the night.

I arrived in the middle of the forest with 14 others, who were also taking part in the reality event. First, everybody had to choose their trousers, jackets, belts and caps. A gas mask was also essential. Then a man dressed like a major appeared with a frightening look in his eyes and told us sternly to find the bunker where we were staying, which was supposed to be some 30 km (18 miles) away.

We set off through the forest with our luggage, and were happy when we came across the bunker after just 100 meters (110 yards), rather than 30km. At the entrance was a man who looked like an NVA officer. He welcomed us, but not with any warm words. Instead, he gave us commands, as he would have done in times gone by.

Being there brought to mind my first encounter with the NVA. It happened when I was visiting friends in Berlin in 1986, and had to use the 200-km (124-mile) transit motorway through the former GDR. I waited at customs for hours and hours, thinking: don’t do anything, stay calm, don’t smile, be serious.

After what seemed like an eternity of waiting, my turn came to be checked by the NVA soldiers. I was afraid. They looked me in the eyes, asked me where I was going, how long I was staying there, what the reason was for my trip, and whether I was smuggling anything. Then they took my passport away for 10 minutes. When they returned, they didn’t say a word, but inspected my car and luggage inside and out. The process took around 15 minutes, and then I was on my way to Berlin. They found nothing.

Now, at the Bunker Museum, I was among 14 people who had paid for an experience with the NVA. The officer opened up the bunker and escorted us to our dormitory. Everybody was responsible for making their own small, uncomfortable bed. The women were then told to cut potatoes for a salad and the male soldiers had to stand guard at the entrance. One soldier had to get the barbecue ready. I was happy that dinner did not consist of old soup, but instead of Thueringer Bartwurst, a regional specialty.

At this point, the major and officers began telling us stories about the bunker and its history. Marco, who was dressed as an officer, had been a real soldier in the NVA when the Berlin Wall came down in early November 1989. He had to continue working as a soldier, without any days off, until the middle of December.

It must have been strange for him to see all those people, his own family included, celebrating the fall of the Wall when he had to ignore it. He said it was not easy.

Some time later, he decided that he would never be a soldier again. Later, his girlfriend asked him to be a guide at the Bunker Museum, where he could use all his knowledge of the period. Because he was so in love with her, he agreed and has been working as one of the uniformed guides here for more than 10 years. He is also the caretaker and concierge at the hotel.

He says sometimes older people who spend a night at the bunker still have the Wall in their minds. Old memories come flooding back, and for some people they are only positive – all the bad stuff is forgotten.

There was a couple in our group who were the only ones from former West Germany. Nearly all the guests at the bunker had come after receiving a voucher for the event as a birthday present. Most of the male participants had been NVA soldiers – if you lived in the former GDR, you had to serve, otherwise you would go to prison or your family would pay the consequences. Someone told me that almost every man from former East Germany aged over 40 had been a soldier in the NVA.

In the evening we all had a few beers together, some people sipped Vodka and women drank the typical east German sparkling wine ‘Rotkaeppchen’. At midnight, people were tired and a chorus of snores broke out. Someone dreamt and spoke in Russian. So many memories. Good or bad - who knows?

After morning exercises led by Andrea Friebe, who works as a fitness coach, everybody was happy in the knowledge that they’d be sleeping in their own beds the following night. We ate breakfast and bid each other Auf Wiedersehen.

It was an interesting event in terms of seeing how much has changed since the time of the GDR – in people’s minds, as well as in practical terms. And it was nice to be there without any more angst over customs inspections! 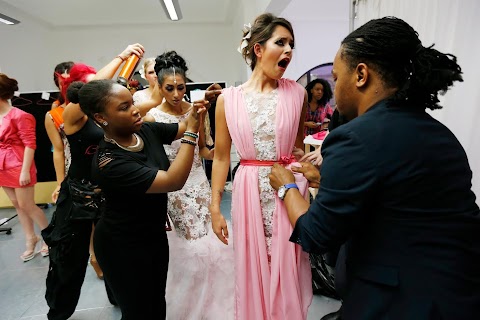