In its heyday the Catskills, or “Borscht Belt” as it was known, was a vibrant and bustling holiday area. The resort was especially popular with Jewish New Yorkers, who flocked to the mountains to escape the stifling heat of summer in the city.

However, with the advent of cheap flights, and the growing popularity of seaside holidays the resort fell into decline, and the area now has many abandoned homes and businesses.

"Some areas in the Catskills have become ghost towns, but the area’s former glory is evident."

Dubbed the "Borscht Belt," in its heyday the Catskills was a bustling vacation resort region popular with middle and working-class New Yorkers of Jewish origin. Situated about 100 miles north of New York City, people flocked to the area to escape the stifling summer heat of the city. Many families would relocate to the area for several months, with men visiting their wives and children on the weekends.

Thousands of people were drawn to the area by hotels like Grossinger's and the Concord, once the largest resort in the United States, which along with hundreds of other smaller resorts, hotels and colonies dotted the landscape.

Legendary comedians such as Joan Rivers, Woody Allen and Rodney Dangerfield performed at and visited the area’s hotels, which became famous as a proving ground for acts. The area also provided the setting for the 1987 film Dirty Dancing.

Cheap airfares, the popularity of seaside vacations and the decline of anti-Semitism had a huge impact on the tourism industry in the region. By the 1970s the area was a shadow of its 1960s peak, just one large resort hotel remained in the 1980s, and by the 1990s it too had fallen into bankruptcy.

Some areas in the Catskills have become ghost towns, but the area’s former glory is evident, the size of the hulking buildings a testament to the number of people that visited the region. Dilapidated theatres, stores and restaurants stand abandoned, but amid the desolation there is still beauty and a quiet majesty.

For a photographer driving through the early morning fog, rolling hills painted with fall colours and the landscape teeming with wildlife, the area is a visual paradise. 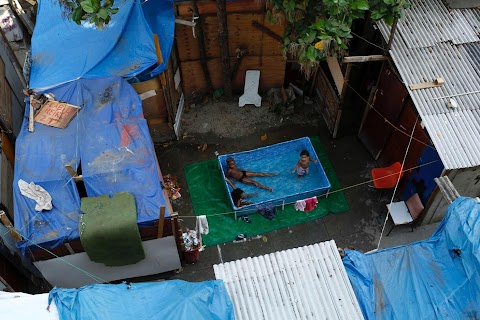 Life under the far-right