Space travel is an exacting enterprise. When the Soyuz TMA-14M spacecraft lifted off carrying an International Space Station crew, its success was the result of months of careful planning and precise engineering.

This timelapse shows the Soyuz TMA-14M spacecraft blasting off from the launchpad at the Baikonur Cosmodrome.

"We are like big frolicking kids – we gather gravel, glue things together and invent something new."

As a great photographer once put it, “to take a good picture, come closer to the object.” But how on earth could I take a close-up shot of a Soyuz rocket as it blast off amid orange flames? Especially when, to comply with safety requirements, I was in a photography position over a kilometre away from the rocket.

The answer was to leave a remote camera at the launch pad. This led to the second question; due to technical issues, photographers can’t control the remote cameras they leave at the launchpad. So how would I trigger my camera?

One option, which was used during the launches of U.S. Space Shuttles, was to use a noise detector. But these are not widely used in my part of the world and I had no intention of ordering a complicated new gadget.

The launch of a Soyuz into orbit is meticulously calculated to the last second. This precision provided the answer to my dilemma - a simple photo-timer the size of a mobile phone. What remained to be done was as simple as ABC – to calculate the hours, minutes and seconds before the takeoff and set the timer on countdown.

Once the technical problem was solved, I prepared the rest of my kit; as well as my camera, this included a bag for gravel to keep the tripod steady, sandwich wrapping, and scotch tape.

Each of us invents something peculiar to protect the equipment we leave at the launch pad. We are like big frolicking kids – we gather gravel, glue things together and invent something new. Some cover their camera with a plastic bag, a team from Japan wrapped their remotes in a special foil used in making space satellites.

After connecting thew wires, I started to swathe my camera in sandwich wrapping, securing it with scotch tape; after a few layers I had a soft, sealed ball perched on a tripod - with a lens curiously sticking out.

It seems to me at times that we look like wildlife “photo hunters,” who leave their cameras in a night forest, wondering whether they will catch something in their trap.

We all have experience with using remotes, but every time we set them up and leave them at the launchpad we fall prey to doubts. Success is the sum of many factors – the parameters of the memory card, correct exposure and focus, the number of shots per second and something as simple as a wire connection – you can spoil it all at the very last moment, while wrapping up your camera.

As Soyuz lifted off in clouds of dust, the wind changed – a blast of eastern wind curled and the sand lifted by the roaring Soyuz blew back to the launchpad, straight towards our remote cameras.

I was plagued by doubts. Accompanied by a Russian space agency official, we went to the launchpad to check our “photo traps.” Lit by searchlights, the site looked so lonely without the rocket. We peered into the night trying to see our cameras in the dark … they weren’t there! Well, they were still there but they were no longer standing. They were lying, scattered around the place with gravel bags attached.

Only my “sandwich” ball was still standing firmly upright. A bullet-like hole proudly gaping in the filter, and the plastic wrapping melted on top. A colleague’s camera had a smashed filter, while another could not look at his pictures because the review button had broken.

I was thinking in horror about my broken lens, because my next assignment was just a day away. Luckily, sandwiches appear to be well protected these days! A broken filter was my only loss, and I had my shot.

Looking at these pictures, some people later asked me – aren’t you afraid to stand THERE? 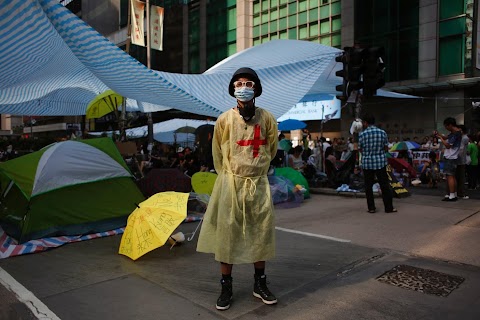 Hong Kong - what next? 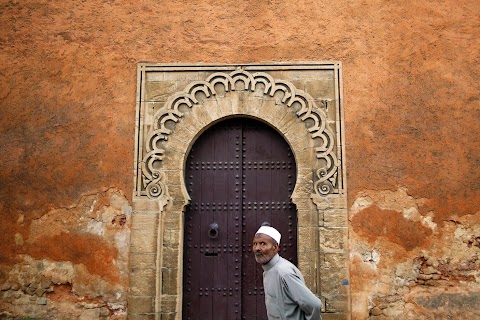 Behind the doors of Rabat