The plantation where Wesley Goldsworthy picks tea is in a rather unusual place: southwest England.

Goldsworthy is one of a small number of employees who work at Tregothnan estate in Cornwall, which grows its own tea and exports almost half of it abroad, including to tea-growing giants like China and India. The estate started selling tea from its tiny plantation in 2005 and last year produced about 10 tonnes.

An estate owned by descendants of the 19th century British aristocrat for whom Earl Grey tea was named is turning history on its head by selling English tea to China.

The Tregothnan estate in the southern English county of Cornwall started selling tea from its tiny plantation in 2005 and last year produced about 10 tonnes of tea and infusions.

Although a drop in the ocean of global tea production, which the UK Tea Council estimated to be about 4.3 million tonnes, Tregothnan has found a niche for its products by trading on England's historical reputation as a nation of tea-lovers.

"It’s unique. There’s no one else who’s growing tea in England and putting English tea on the market," owner Evelyn Boscawen told Reuters.

The long history of immersing tea leaves into hot water for a refreshing drink is not lost on the son of the current Viscount Falmouth and a descendant of 19th century British Prime Minister Charles Grey, for whom the bergamot-flavoured Earl Grey tea is named.

Chinese tea has been coming to Britain since the East India Company first imported it in the 17th century for consumption by wealthy aristocrats. By the Victorian era, taking tea had become a regular ritual at almost every level of society from high tea in country houses to the workman's "cuppa".

But the Boscawens at Tregothnan are bucking the historic trend of tea flowing from East to West by beginning to export some of their wares to China and elsewhere.

"We do see China as an opportunity at the moment," Boscawen said. "The Chinese are great lovers of buying exotic things from all over the world. Even if it might have come from China (originally)."

Tea, native to Asia, is not traditionally grown in Britain but can be cultivated outdoors at Tregothnan, which is situated in England's southeast and benefits from an unusual microclimate similar to that of Darjeeling in India.

Less similar to India is the tiny scale of production at Tregothnan, which might be large enough to be considered a small Darjeeling tea garden, the English estate's commercial and garden director Jonathan Jones said.

"We went into this right from the outset as being able to put the English into English tea," Jones said. "We weren’t ever looking at being the new India or China, that’s ridiculous."

This is a miniscule sum in comparison to the global export market, with the world's largest black tea exporter, Kenya, predicting tea exports earnings of $1.33 billion in 2013.

But the small English operation is attracting attention, including from Chinese state television, which pitched up for several days of filming for a programme to be aired in the coming months to hundreds of millions of viewers.

Tregothnan is also hoping to open a franchise of tea houses named "Festival of Tea", selling tea in a coffee-house style. They plan to open one such outlet this year in Shanghai, after "serious interest from Chinese investors," Jones said.

The export market is also a place where Tregothnan hopes to find customers willing to meet its higher prices. Small-scale production and its location means its teas can cost up to 20 times as much per cup as lower-cost products.

"We're in recession, but other countries aren't, so it makes sense to export," general manager Andy Phillips said. "The key is not to get dragged into competing on price."

Tregothnan has targeted the high end of the market in Britain, selling some of its products to expensive hotels like The Savoy and Claridge's, which are already major tourist destinations for expensive English afternoon teas.

Referencing the stereotypical English love of a good brew is a big part of Tregothnan's marketing strategy.

"There is no trouble so great or grave that cannot be much diminished by a nice cup of tea," is the quote attributed to Basque philosopher Bernard-Paul Heroux that adorns individual packets containing the estate's tea bags.

With a portion of its tea bushes nestled in the estate's pleasure gardens, Tregothnan looks more like a vast country house than an agricultural business, and its owners live on the site which has been the family home since 1335.

The historic setting is important for the brand. "It’s an enormous story that goes into the whole product," owner Boscawen said.

Tregothnan is part of a wider trend of small tea producers in strange parts of the world, according to Jane Pettigrew, a tea expert and author of several books on the subject. "People are planting tea in the most extraordinary places at the moment," she said. 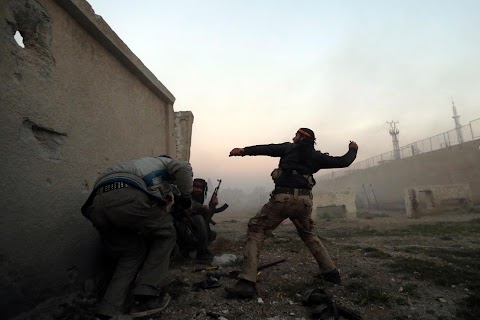 Battle in a Syrian army base