Mount Kongde (seen above) reaches over 6,000 meters above sea level, but even this dizzying height is dwarfed by a nearby peak: Everest, the world's tallest mountain.

In April this year Everest was hit by its deadliest ever disaster when 16 Nepali Sherpa guides were killed in an avalanche. The accident prompted many Sherpas, who take breathtaking risks to help tourists up the mountain, to stage a boycott.

"I realised this was really a black year for Everest."

I went to document life around Everest just a week after 16 Nepali Sherpa guides were killed there in an avalanche. In total more than 4,000 people have reached Everest’s summit, and about 250 people have died climbing it. But this was the deadliest single accident in the mountain’s history.

It had big consequences. After the disaster, Sherpas staged a boycott and refused to take foreign climbers up the mountain. Guides take huge risks when they help tourists up Everest, but sometimes they earn as little as $1,000 in a season. Many are angry with the Nepali government, which makes a lot of money from the dangerous business, and these feelings have fuelled their actions.

So when I flew to Everest to photograph the situation, I knew that all would not be well.

It took around 45 minutes for me to fly from Kathmandu to Tenzing Hillary Airport in Lukla, more than 2,800 meters above sea level. Being at such a height makes you realise how delicate you are and how strong Mother Nature is. Acute Mountain Sickness (AMS), or altitude sickness, is a problem you have to be prepared for before you leave.

To give myself a chance to adjust, I spent a night in Lukla, the so-called “Gateway to Everest”. The village is well equipped with hotels, cafes, and shops selling mountain gear. Here, you can really see what a big industry Everest is.

Lukla was also where I met my guide, Lakpa Sherpa, who would take me to Everest base camp and Kala Patthar, from which you can see the mountain’s peak. Lakpa, 42, has three daughters and has been working as a porter for the past 20 years. He is the only member of his family who works, and told me that he earns around $800 or $900 in a season to help support his household.

As we set off, I could see it was a strange situation. Everything and everyone else around Everest base camp was wrapping up and leaving after the boycott, but Lakpa and I were just starting our ascent.

Our next stop, Namche, seemed even more touristy that Lukla, with lots of bars, hotels and shops. I was surprised to see a soccer game between Liverpool and Chelsea being shown on TV. I was witnessing the “highlife” of Everest. Compared to Kathmandu, goods were also very expensive, and why shouldn’t they be? Everything had to be flown in to Lukla first and then carried up to different villages.

As Lakpa Sherpa and I climbed higher to Pangboche, I started to feel the effects of altitude sickness, and had to drop down to Phunki Tenga to recover. From there I took some short hikes to Khumjung, where I met the family of one of the Sherpas who had died in the avalanche.

Like my guide, the victim was called Lakpa Sherpa (a very common name in the area) and he used to be a cook at camp 2. When he was killed, he left behind a wife, his elderly parents, and his daughter who was only a few weeks old.

Since Lakpa’s death, the family has been stranded because there is no one to support them now. After the accident, the government said it would pay $400 to the families of those who died to cover funeral costs, but Lakpa’s father Tenzing Sherpa said that they had not yet received the compensation, and that the money would not be enough.

As I interviewed the family, and especially as I saw Lakpa’s baby daughter, my heart was overwhelmed by tears. I felt like nothing on Everest is certain, with people risking their lives for just a few thousand dollars.

In Phunki Tenga I also met 31-year-old Tenzing Bhotay Sherpa, who was one of the people to survive the deadly avalanche. The day the disaster hit, Tenzing said he woke up at 3 a.m. and headed from base camp towards Camp One, crossing the Khumbu Icefall. About five minutes after he reached the camp, he heard a loud noise: it was the blast of the avalanche.

The first thing he did was radio his boss, who told him to return. On his way back he saw around 10 bodies that rescue teams were working to recover. He met a survivor with a broken back and he helped some of the emergency workers to carry the injured man to the safest point on the icefall.

When he got back to base camp, Tenzing said he could not stop crying because he was sad for the people who died and at the same time he felt happy that he survived. But despite it all he still plans to go climbing next season. Tenzing doesn’t have much money and he has a wife and two sons to look after, so he can’t give up his job, even though it’s dangerous.

After meeting Tenzing I soon recovered my health, and headed towards Tengboche, which lies between Phunki Tenga and Pangboche, and is where I had my first encounter with Everest. Nothing is fixed in this region; one moment you see the mountain, the very next it disappears behind clouds. It’s like playing hide and seek.

I was getting closer and closer to my destination but with every passing day, every step that I took was getting heavier and heavier. I had this sharp pain in my knees and the two things I could hear clearly were my breathing and my own pounding heartbeat. It was the most extreme walk that I have ever done in my life.

When I finally reached base camp, it looked deserted. The area should have been a market at this time of year, but everything was closed with just a handful of tents left. I realised this was really a black year for Everest.

My final destination was Kala Patthar, where you can see Everest right in front of you. I got there and I felt all the struggle and emotions just flowing from me in the form of tears.

I had reached 5,550 meters above sea level, the highest point I have ever been, higher than base camp. But even though I was at the top of the world, I still felt so small. 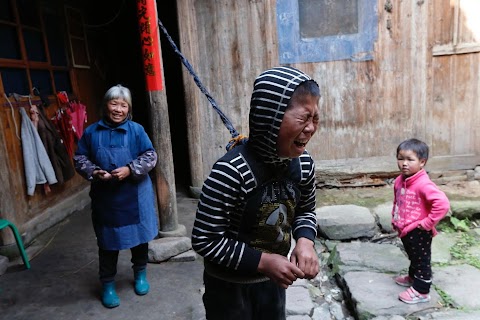 Life on a leash 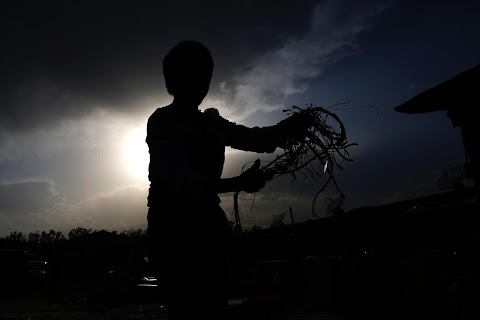