Just outside the one-room cabin that gives her a 360-degree panorama of the Montana wilderness below, Samsara Duffey peers into a pair of binoculars. All around her, the parched mountains are shrouded in smoke blown over from blazes in Idaho and Oregon. Under that gray veil, the Rockies look mystical, almost ethereal.

Suddenly, Samsara focuses. She thinks she's spotted a puff of smoke emerging from a dead tree in the valley right across from her. But it's a false alarm – an illusion caused by the faraway wildfires.

So far this summer, blazes have torn through 5.7 million acres of the United States. Summer wildfires, fueled by climate change, have also ignited in other parts of the world, roaring in several Mediterranean countries and from Syria to Siberia.

In the western United States, climate change is raising temperatures and exacerbating drought, helping to create the hellish fire season this year. June was the hottest month on record in the country, with California's Death Valley roasting under temperatures of 130 degrees Fahrenheit (54 degrees Celsius), while July was the world's hottest month on record. Flammable dry brush and dead trees have built up after decades of fire suppression. Megafires, blazes that burn more than 100,000 acres, have become a new normal in states like California.

Such extreme weather events will only become more severe, a U.N. climate panel said in a landmark report in August, warning that global warming is close to spiraling out of control. Quick moves to cut greenhouse-gas emissions could curb some of global warming's impact, but the world's emissions of such gases – mostly carbon dioxide from burning fossil fuels – are still rising.

"At least over the next few decades, we are going to see these recurring really large, catastrophic wildfires," Ben Cook, a climate scientist at the NASA Goddard Institute for Space Studies, says of the western United States. "You'll have good years, and you'll have bad years, but climate change is leading towards a trend of more area burned every year."

The forecasts are ominous for firefighters like Mark, whose job is already grueling on the best of days. For around $25 per hour – a wage that is higher than the entry-level smokejumper pay of roughly $16 per hour given his 23 years of service – he can be deployed anywhere in the country. He fights fires for up to the 16-hour limit, eats freeze-dried food and sleeps under a rudimentary tent fly, and does it over and over for up to 14 days straight, the typical rotation for federal firefighters.

Built in 1962, the lookout is framed on all sides by 107 large window panes, making for a very early, sun-smothered wake-up. Inside, there's a bed, a stove, a counter and a footrest Samsara fashioned out of an old U.S. government trunk she found under the lookout. There's also a hand mirror she never uses – "unless I have something in my eye" – and stacks of knitting yarn, audiobooks and a photo of Mark parachuting. To go to the bathroom, she walks down a rocky trail to a lone toilet seat built on top of the mountain. It has no walls, and looks over miles of wilderness.

At the center of the lookout is the Osborne Fire Finder, an early 20th century turning board that is still every lookout's prime tool.

A circular, graduated measurement ring surrounds a flat map that has the lookout in its center. To find a fire's bearing, Samsara squints into a sighting hole on one side of the tool's rim. She rotates the measurement ring until it is aligned with a crosshair in a sighting device on the opposite side, through which she can also see the fire or smoke. Then, using the map and her knowledge of the terrain, she can estimate roughly how far away the fire is from her. She uses her radio to call the dispatch center in Great Falls and provides them with the fire's coordinates and characteristics.

This old-fashioned way of spotting blazes grew popular after terrible fires swept through the West in 1910, burning an estimated 3 million acres. By around the 1950s, around 5,000 fire lookout towers had been built across the United States. Many have since closed, as infrared cameras and drones replace the human eye. The Forest Fire Lookout Association estimates that only around 400 lookout towers are still operational today.

But Samsara says lookouts make sense in the Bob Marshall Wilderness, where vehicles are banned and cell signal is intermittent. In any case, at roughly $15 per hour, she's hardly denting U.S. coffers. The wage adds up to between $10,000 and $14,000 per four- to five-month season, depending on overtime. It includes the handful of weeks she spends doing miscellaneous work for the Forest Service before opening the lookout in June. From her three-month-long winter job, she earns less than $7,000.

Left: Mark stands in front of rolls of fabric used for different smokejumper gear.
Right: Cubes of boxed water attached to individual parachutes are lined up on shelves before being loaded onto airplanes.

The Forest Service told Reuters there were "recruitment challenges" in some areas, including California, where salaries offered by state, local and private fire organizations have surpassed federal wages. "Recently, the Department of Agriculture and Department of Interior took the first step towards making wages more competitive in those areas by offering new pay initiatives," the Forest Service added.

"Fires are staffed minimally with just enough folks to basically keep them out of towns," Olson says. "You're not necessarily putting these fires out."

The Forest Service told Reuters it had to set priorities. "With so many ignitions, we don't always have the resources to suppress them all at once," the Forest Service said, adding that it prioritizes combating blazes that are threatening communities.

When he was younger, Mark says, he'd try to work the entire summer without days off. But as he's matured and the season has lengthened, he's become better at taking time out. He has yet to decide whether he wants to continue working until he turns 57, the retirement age for federal firefighters.

Most of the time, he says, he'd like to keep going. "But some days," he adds, "I would like to retire and spend more time with Sam."

It was during the end of a cold Montana winter, when fires were briefly not a worry for them, that Samsara and Mark met.

It was early 2012, and Samsara had decided she wanted to take a class about information-sharing to enhance her work as an outdoors education teacher. She was only free in March, though, when the class was offered in West Yellowstone, some four hours away from her home in Helena. She signed up and asked to stay at the jump base's dormitories.

Mark was in the office when she checked in. They quickly established that they knew a lot of the same people, including a former smokejumper who worked in the same office space as Samsara in Helena. "She was trying to get some stories on him to tease him," Mark recalled.

When she checked out, they chatted even more. Samsara went back to Helena, but liked him enough to buy a cell phone so that they could stay in touch. They started texting. Soon they were talking on the phone almost every night. They were amazed at how much they had in common – a solitary nature, a passion for the outdoors, and a long-standing entanglement with fire.

Mark's guestbook message, written in neat blue ink after a July visit to the lookout that year, simply says: "Best weekend of the summer."

They agreed they would never ask the other to stop fire work. Their arrangement sometimes baffles people. "It used to be, 'How are you ever going to get a boyfriend being up here?'" Samsara says. "Now it's, 'What does your husband think?'"

But Mark's disapproval only extended as far as furniture: He told Samsara she needed more than one chair at the lookout. So he built four fold-out wooden ones, two of which are now in the lookout. They met each other's dogs and went on camping trips. They had many mutual friends in the fire community, but no other lookout-smokejumper couple.

In May 2015, they got married in a civil ceremony in Helena. There was no guest list; it was just the two of them. About a week later, Mark was sent on a fire. After the wedding, Samsara moved to West Yellowstone.

During the summers, they go for several weeks without seeing each other. For years, they sent each other letters because she didn't have a signal at the lookout. During deployments, Mark carried paper, envelopes and stamps with him. His letters, in which he often slipped pressed flowers, were sent to a Forest Service office and tucked in with the mule pack that resupplies Samsara with food. Hikers would mail her responses. Now that Samsara has intermittent cell signal, they send fewer letters.

But even when Samsara's signal drops for a long time or Mark is incommunicado, they feel connected through the natural world, she says. "No matter where he is, he's watching the same moon and the same sun." 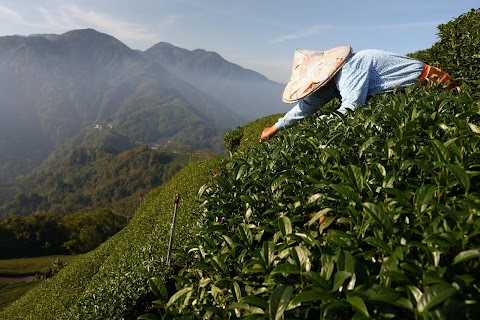 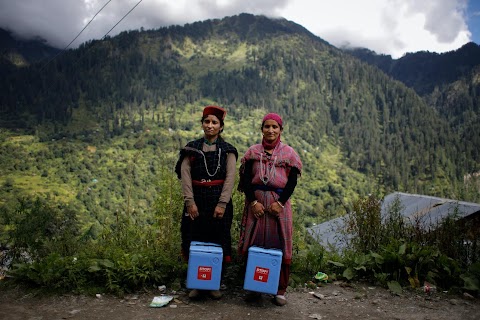