A woman injured in a road accident lies in an ambulance in Bangkok during Songkran, Thailand's traditional New Year.

The festival is a raucous week-long party which brings revellers out onto the streets to take part in water fights. But it also has a darker side; officials know it as "the seven dangerous days," when traffic-related deaths and injuries surge, and volunteers with Ruamkatanyu, a free ambulance service, find their services in high demand.

“There are no seat belts where I’m sitting and for a moment I think lying in the stretcher would be a good idea.”

Totally unconcerned by oncoming traffic, Khun Tuey powers the ambulance through Bangkok’s narrow streets as fast as its engine can push it.

Soon after the chase started, the pointer on the speedometer kissed the 120 mark and for a short moment I take my eyes off the road to look around. Next to the driver sits his beautiful, four-months-pregnant wife Amarin, who ignores what passes by the windshield as if she is watching a session of Bulgarian parliament on TV.

To the left is Somat, a medic with 110 hours of training – the team’s expert on injuries. His eyes are closed and it looks like he is sleeping. I hope he is praying. Tonight, we all need prayers to come true.

It is the crazy, wet festival of Songkran, as the week-long Thai New Year is known. Earlier in the day, we all enjoyed the celebrations – I sprayed water, wore powder on my face, drank beer and played the fool with friends.

But the fun part is over. Tonight is another Songkran night; one of seven dangerous ones when an already high number of traffic-related deaths and injuries surges. Experts say Thailand has the greatest number of road deaths per capita in Southeast Asia, due to a combination of lax road laws and careless driving habits.

Of those fatalities, four percent take place during Songkran, when alcohol is often added to the mix.

To get the full picture of the festival and its duality, I joined the foundation patrol for a couple of nights. The foundation is called Ruamkatanyu, and it is one of the two largest free rescue services for accident victims in Bangkok.

Not long after I climbed into their ambulance, the call over the radio announced the accident. With a quick prayer and his hands closed above the steering wheel, Khun Tuey takes us on a crazy roller coaster ride through the city’s downtown.

Behind the driver and his front seat companions, a young volunteer and I are glued to the little window looking towards the windshield. There’s another volunteer (sleeping) and another medic (checking his iPad) – all of them routinely uninterested in what seems to me to be our certain and fast approaching crash.

I had been warned that foundation drivers are something special, on top of the fact that almost every Thai I know gets possessed by ghosts of F1 drivers once behind the wheel. But this drive is beyond my expectations and my alarms are switched on to full.

I try to remember statistics about which seat in the car is the most secure in the case of a crash – is it the back left, just behind what is called a “shahid” (martyr) seat in the Middle East? Or behind the driver? There are no seat belts where I’m sitting and for a moment I think lying in the stretcher would be a good idea.

Have I ever heard news of an emergency van crashing in Bangkok? Would newspapers publish such a thing? I ask our driver, politely and trying not to show any concern for our safety, if he ever had an accident. He said that in his 11 years of driving for the foundation, he’s had zero accidents. The only accidents he has had were when he was driving backwards; forwards and fast is okay.

I’m a bit calmer now. However, the feeling is similar to when I’ve been in claustrophobic armoured vehicles, with U.S. soldiers driving on Iraqi roads littered with bombs. There are only two things you can do: ask for the vehicle to stop and get out now, or just relax and pray for good luck.

After a few long minutes of manic chase, we are at the site of the first accident of the night – a man who fell off his motorcycle in front of an apartment building in Thong Lor. Most of the injuries during the first few days of Songkran in Bangkok are from motorbike accidents. Later in the week when people get tired from partying and drinking, fights take over as the main cause of injuries.

A man is helped by a smaller team from the same foundation that came to the site before us. That is not unusual – no matter how small the accident is, there will always be more than one team coming from different places to help.

A few minutes later, while driving back to a petrol station that serves as their night base, a call for another intervention came over the ever-screaming radio used by foundation volunteers. At the same speed (and with the same prayers), the ambulance reaches the front of a building on Rama IV Road. It’s a hit-and-run accident this time. The car hit a foreign man and drove away.

And it goes on like this for the whole night. The team goes from one accident to another until after 2a.m. (bar closing time) when the traffic calms down and the city goes to sleep. There will be a few vehicles left on the streets, but for most of us it is time to go home.

In my few hours spent with a foundation ambulance patrolling only a small part of Bangkok, I witnessed several motorcycle accidents (of which two were very serious), two hit-and-runs and one strange episode in which a man, unconscious and helpless, was found lying on the road. The injured people are helped on the spot and delivered with great speed to the hospitals nearby.

Whoever follows news these days in Thailand is bombarded with numbers about road accidents during the festival. Numbers and numerology is big in Southeast Asia. Everyone is interested in them, writes them down and looks for the pattern they appear in. Often, people rush to the scene of an accident to write down the numbers from the license plates of the vehicles involved – the numbers might be lucky and can be used in the lottery.

The numbers for this year’s Songkran are awful – more people were killed than the previous year.

It is difficult to understand why the festival celebrations are sometimes so wild, despite the government’s pleas for people to respect each other and be careful on the road. Every year, the numbers of casualties gets grimmer and grimmer.

Khun Tuey and his comrades can’t do much about the number of accidents but they can certainly help the statistics – they do save lives. And that’s what they do night after night, all year long. I felt privileged to be a part of their team for a few crazy nights of Songkran.

From serfdom to politics in Pakistan 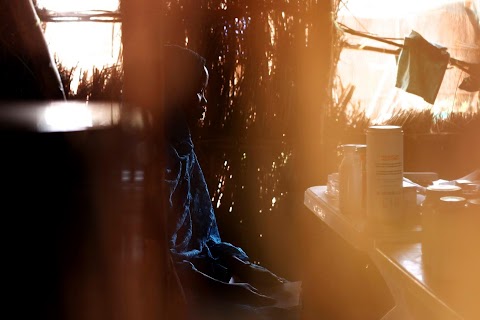 Life on the margins