The body of a woman with three gunshot wounds to the head lies curled up on the ground.

The shocking image is not such an uncommon sight in San Pedro Sula, which has a homicide rate of 169 per 100,000 people and has been ranked the world's most violent city for two years running, according to a recent report by Mexican civil society organisation, The Citizen Council for Public Security and Criminal Justice.

"People seemed to know who the killers and shooters were, but they were too afraid to say."

Some weeks ago, I went to cover a soccer match in San Pedro Sula, considered the industrial capital of Honduras. It also bears the far less honourable title of being the most dangerous and violent city in the world.

San Pedro Sula, the country’s second largest city after Tegucigalpa, has a homicide rate of 169 per 100,000 people and was named the world’s most violent city for a second year in a row, according to the Mexican Civil Society group The Citizen Council for Public Security and Criminal Justice. Civilians are allowed to own up to five personal guns, and arms trafficking has flooded the country with illegal firearms.

I arrived when most of San Pedro Sula’s residents were escaping to the beach. Temperatures were hitting 40 degrees Celsius (104 degrees Fahrenheit) in the shade and the heat was overpowering. I went out for a walk with a fellow journalist who only covers crime and while we were walking he described San Pedro Sula as a supermarket for reporters looking for dangerous stories.

We entered the emergency room of a local hospital and I could sense what he was talking about. It was packed with people, most of them from low-income neighbourhoods. Nurses and doctors were running around, trying to tend to everyone, but it was obvious that there was neither enough medical staff nor enough materials to treat everyone.

I could hear screams from patients and the smell was suffocating.

Night had fallen and more and more victims of violence were arriving. A man with numerous stab wounds was brought in. His hand was almost dangling from his wrist – he had been attacked by members of the Mara 18 street gang who had wanted to kill him with machetes and then tried to dismember his body.

He was crying as he told me how he had managed to escape to a road and been given help. But he also moved and looked around as if nothing had happened to him. He seemed to be completely unconscious of his wounds and must have been in shock.

I stayed at the hospital until late and watched the nurses and doctors, whose faces were marked by fatigue. The emergency room was in a dire state. The medical staff have to buy most of the supplies themselves, paying for them out of their own pockets, and patients have to bring in gauze and bandages.

Later on, a colleague walked me to the hospital morgue. He explained that normally all the people who die as a result of crime would be taken to the morgue of the Public Ministry, but because the place was so full they started keeping the bodies in hospital facilities instead.

A security guard then approached us and I thought he would kick us out, but when my colleague asked him how many bodies were in the morgue, the guard just opened the door and let us enter without saying a word.

I was struck; I’d never seen anything like that. Everybody helped us and we had almost complete access. I believe it was to show us what conditions the medical staff were working under and how critical the situation was for the patients.

The next day it was time for some crime reports, and although the streets were deserted, little by little my colleague started receiving calls from the police or from his newspaper about the incidents that had just taken place.

The first victim was a woman who had been sitting outside a wooden kiosk when two strangers on a motorcycle suddenly drove by and shot her. According to the police, she had been selling drugs but failed to pay her suppliers (the same Mara 18 street gang).

The most astonishing thing for me was that there was a police station just five houses away from the crime scene. When I asked one of the police officers if they hadn’t heard anything, he said, yes, but that they didn’t interfere because they didn’t want to die.

While we were watching the forensic technicians doing their work, another call came in and we went to the next crime scene on a highway that leads to Tegucigalpa. A woman had been shot three times in the head and she was kneeling on the ground. It was a grotesque scene; it looked like she had been asking her killers for mercy.

Neither the police nor the onlookers were keen to stay too long at the crime scenes. Normally, everybody leaves as fast as possible in order not to become the next victim. Certainly, people seemed to know who the killers and shooters were, but they were too afraid to say.

When I went back to the morgue, a different guard opened the door for me. He was eating, and seemed to be slightly drunk.

He told me: “Come and see, today all the dead are from violent crimes”

I asked: “How many are there?”

Guard: “Three who have not been picked up, five who are in the freezers and a young boy who arrived today. Nine in total.”

Me: ”How long does a body last outside the freezer?”

Guard: “Do you feel the foul smell? Those over there are already rotten.”

Guard: “I’m used to it. It’s normal to me. Nothing makes me sick”

I took some pictures and had to leave because of the nauseating smell.

In the midst of all this, I did actually cover the soccer match: a 2-2 tie between Honduras and Mexico. The locals were celebrating and it seemed that, for a few hours at least, they were finally able to forget all the gruesome violence.

But it didn’t last. Not long after the game we got another call and rushed to a neighbourhood where two men and two women had been shot and killed.

There is not enough paper to print all the dead in this city. 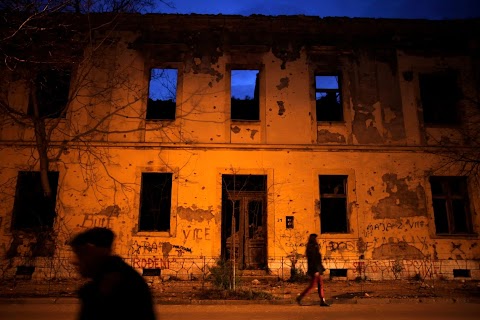 A town split in two