Students at Deung Yong Moon boarding school lie back during a meditation session with a hypnotherapist. There’s no doubt that they could use the relaxation. At this school, students prepare to retake South Korea's college entrance exams with military-like discipline – studying until late into the night and cut off entirely from television, mobile phones, MP3 players, the Internet and socialising with the opposite sex.

Conversations between men and women are forbidden at the school on the outskirts of Seoul, where security cameras watch the students' every move. There is no access to television, the Internet, mobile phones or MP3 players.

Welcome to the monastic life of a boarding school for students dedicated to spending nine months preparing to retake South Korea's college entrance exams, in the hopes of a place at the best college and a job for life at a top corporation.

"During study hours it's difficult to go to the bathroom even if I want to. Waking up early in the morning is also hard," said Um Hee-joon, 20, over a spartan lunch of pork cutlet.

This year, the life-defining tests are on November 8.

South Korea's exam hell is an annual event so full of pressure that many students are driven to despair, with some even taking their own lives. More than 50 percent of those between the ages of 15 and 19 who are suicidal have given "academic performance and college entrance" as a reason, says the National Statistics Korea.

Pity even more the hundreds of thousands of students, around 20 percent of the total, who take the exams twice or more. They aren't delinquents, but simply failed to meet their own or their parents' expectations the first time around and are living through another year of hell.

Some 140,000 of the test takers signed up for this year's entrance exam on November 8, 21 percent of the total, have already graduated from high school, according to government data.

But in some Seoul districts where middle-class parents drive their offspring even harder, such graduates account for more than 50 percent of test takers, education experts say.

Those who are really determined, or desperate, may decide to spend nine months at one of 40 private boarding schools like the Deung Yong Moon in Gwangju, on the outskirts of Seoul, to dedicate all of their waking hours to preparing for the test.

While male and female students study in the same classroom they are forbidden to go to the snack shop at the same time, stand in separate lines for lunch and eat at separate tables. Dating is definitely off the menu.

Wake-up calls at the schools, which can cost 2 million Korean won ($1,800) a month, come at 6:30 a.m. Apart from group exercises, meals and short breaks, it is study, study and more study until midnight.

Not one of the five hundred students in the boarding school has access to television, the Internet, mobile phones or an MP3 player. Men wear regulation blue tracksuits, women red.

"I feel really suffocated here. I wrote down 100 things I want to do after the exam. I want to travel most," said Cho Hwan, 20.

"I thought if I studied for the exam another year again, I would be able to get higher scores. But not that much," added Cho, frustrated over practice tests.

To make sure that Cho and his classmates don't waste their time, there are more than 80 closed-circuit television cameras. Supervisors monitor the students' every move to catch anyone dozing off during study hours.

If they break rules, the students, of whom 80 percent are male, get "yellow cards". At worst, they could be expelled.

The study regimen gets more intense from a month before exam day. The school takes down pay phones and bans leaves. Even parental visits are strictly limited.

"Students grew up with a lot of freedom and have been pampered," said Han Sang-hee, head of the school, whose name translates to "Gateway To Success."

"We (the school and students) agreed with each other that the school would help bring out their best abilities through strict discipline and control like a military training academy. So the students can bear with it," he said.

"Army reservists sometimes escort them to the exam site."

Some students even resort to the service of a school-provided therapist, who hypnotises students and then intones in a low voice, "You have the strongest confidence in your entire life," as if it was exam day.

"I've spent a whole year to retake this exam. I really hope I will get a good score so I won't regret this," Cho said. 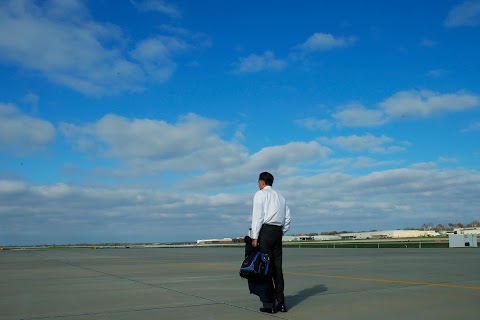 On the campaign trail with Romney