A year ago, the beach where this playground slide stands was underwater, hit by the force of Superstorm Sandy.

The massive hurricane drove into the North American coast on October 29, 2012, killing at least 159 people, damaging over 650,000 homes and devastating parts of several eastern states. Images of these areas just after the storm struck, compared to shots of the same places now, are a stark reminder of the havoc it caused.

Before: A vehicle ploughs through waters flooding a street in Southampton, New York.
After: A truck turns onto the same road, now completely clear.

Before: A home stands surrounded by surging waters in Bellport, New York on October 30, 2012.
After: The same house now stands in the middle of a green lawn.

Before: The driveway of a house in Southampton, New York, is submerged just after the storm hit.
After: One year on, the drive is clear and the scene restored to normal.

Before: A man stands next to a broken vehicle amidst property damaged by the superstorm.
After: One year on, the road has been cleared and fixed up.

Before: Two people walk past a beach club, partly lifted off its foundations by the storm surge in Sea Bright, New Jersey.
After: One year on, the club has been repaired.

Before: Tradewinds Lane in Sea Bright, New Jersey, is coated in sand deposited by the storm.
After: The street is now pristine.

Before: A month after the storm, a park bench stands in the middle of a heavily damaged section of the boardwalk in Long Beach, New York.
After: A year after the disaster, a pedestrian walks past the same spot.

Before: A man walks down Shore Front Parkway surrounded by debris in the Rockaways, New York.
After: A year after the storm, two men walk their dog along the same road. 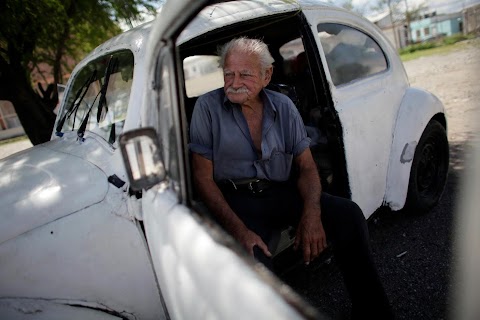