Dadaab, the world's largest refugee camp, has had to open a new extension to house thousands of Somalis fleeing drought, famine and war. The Kenyan government opened Dadaab camp, designed for 90,000 refugees, in 1991 as a temporary solution to the civil war across the border. But 20 years on, it has become host to well over 400,000 refugees.

“Dadaab will continue to grow just from the natural circle of life.”

It is the world’s largest refugee camp with a population of over 400,000, almost exclusively Somali, refugees. Its original capacity was only for 90,000. Dadaab became front-page news in the summer of 2011 as the population spiked with a wave of new arrivals flooding into the camps at a rate of more than 1,500 people per day as they fled famine in their home country.

It’s a huge place, and getting around even requires a commute. Convoys roll from the main aid compounds only at certain hours for security reasons. Aid workers talk about how safe and peaceful it had been during the first two decades, but the internal politics and demographics of the camp have changed dramatically over the past three or so years, as new arrivals outnumber the original shelter-seekers.

When I got there, the crush of new arrivals was still being processed, but the crush of international media had already left town. One of my first nights in the camps, at the bar in the UN compound, I met the crew who operated the satellite television transmissions for networks around the world whenever they wanted to “go live” from Dadaab. They had just rotated in and were prepared to be there as long as one month. But they left after just four days, as there was no longer any demand for them. Anderson Cooper of CNN was one of the last big names to pass through, and he had left a week or so before.

My primary work for Reuters is in the halls of power in Washington, where it’s usually a lot more fun being in the middle of the biggest stories, but in Dadaab I was happy to be there without the hoopla of a lot of other media around. It gave me a little more freedom to find things that interested me — and that I thought readers would also find interesting — and not just chase the story of the day.

While reading some of the UN statistics reports, I noticed that they reported “new births” on the same line every day as they did “new arrivals” — the starving people materialising from the desert. I hadn’t known much about Dadaab before I arrived there; about its history and how it had been there for 20 years and looked to be there another 20. I thought that one way to illustrate that life will go on in Dadaab was to show the maternity ward at one of the hospitals.

Even if the flow of new arrivals stops tomorrow, Dadaab will continue to grow just from the natural circle of life. The Somalis have one of the highest fertility rates of any nation in the world. The UN, U.S. government and the World Bank all rank Somalia among the ten countries with the highest birth rates, with each mother averaging over six births.

I also felt that showing healthy children in the maternity ward would make a more hopeful counterpoint to the images of starving and malnourished children that had been seen around the world in recent weeks, which were no doubt newsworthy but also horrifying.

I made arrangements to go to the hospital at the one of the three main camps, Hagadera, which is run by the International Rescue Committee. Doctor Beldina Jakundi allowed me to shadow her while she completed her rounds that morning.

The visit there accomplished what I hoped it would — it was a way to show another angle of a big story, but at the same time it was a nice break from some of the other things I was photographing at Dadaab: the long lines of people waiting to be processed every morning, fisticuffs at food distribution centres as people tried to jump ahead in line, the vast expanses of “tukuls,” or improvised dwellings made of sticks and cloths that looked more like bird’s nests than homes — the whole dehumanising process for these thousands of people.

Experts say the population at Dadaab will top half a million by next year. Even after the famine abates, there will be stories to be told here. 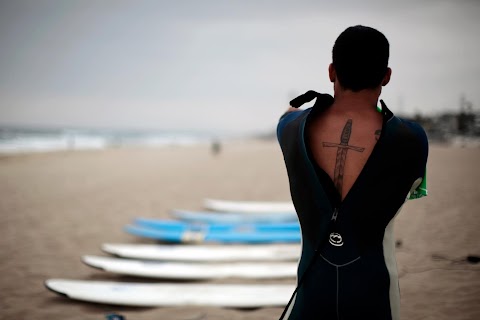