Manuela Mitre’s husband and young daughter watch a new member of their family emerge into the world, as two midwives assist with the birth.

Brazilian couple Manuela and Andre decided to have their second child at home in the presence of their two-year-old daughter Alice, so that she could share in the experience.

"Manu was incredibly calm throughout, in spite of the pains of labour."

It was a night like any other, until my phone rang at 1:30 am. I reached to answer it without turning on the light. A woman on the other end said: “My water broke.”

“Manu?” I asked. Manuela, or Manu, said that I should come over to her house right away. I hung up, went over to my sofa and looked at the cameras and lenses, without knowing if I had even charged the battery.

The phone rang again and it was Andre, Manu’s husband. I answered it with a question. “Damn, did she already give birth?” Andre said no, but asked when I would be arriving so he could tell the doorman. I took a quick shower, grabbed my gear, drank coffee, and in half an hour I was on my way along empty streets.

I was about to witness, at least through my viewfinder, a child’s birth for the first time.

Two days earlier I had visited Andre and Manu, and they told me they planned to have their two-year-old daughter Alice with them when their new son, Gael, was being born. I was shocked, but thought it a great experience for Alice. The girl would see her brother emerge into their lives, without just “appearing” like magic from the hospital. Alice would have the greatest experience that a child could have with her sibling.

As I carried all my gear, cameras, lenses, batteries, monopod, and ladder, I knew it looked like I was going to cover a soccer game. I laughed nervously at myself about the new experience. I knew that I was taking with me just about every piece of gear I owned, simply because I had no idea what I would need to photograph a birth, and I had to make sure I didn’t fail.

Andre was waiting for me at the door. He led me to the room where Manu was in bed with a midwife. “Hi Nacho,” she said, and those were the last words she directed at me until after the birth. She allowed me to become invisible among them, which I found extraordinary. Her labour pains became very strong, and Andre embraced her on the bed.

The midwife did her job as I photographed all I could in the very low light. Manu got up as Andre began to fill the plastic kiddie pool with warm water. They had decided to have the birth in a pool, in accordance with the belief that warm water creates an environment similar to the mother’s womb and that this reduces the trauma of birth.

A child in the next room began to cry. It was Alice, their first child, who was told that she would soon have a brother, who would come out of her mom’s belly. Once in the pool, Manu held her head with both hands until the midwife grabbed them as Andre led Alice into the room.

A big smile appeared on Manu’s face, as Andre explained to their daughter everything that was happening, including who I was and that I was going to photograph her new brother.

Andre was doing an amazing job of taking care of Manu and Alice without getting nervous, but then only he knew what was going on inside his head and his heart.

Manu was incredibly calm throughout, in spite of the pains of labour. At one point she screamed loudly and yelled, “It’s coming, it’s coming.” The midwife moved closer to help, and a paediatrician and another midwife arrived just in time. Andre sat with Alice next to Manu. It was an unforgettable image for me and, I imagined, in Alice’s subconscious too.

I climbed up my ladder to shoot overhead, and then came the moment of truth, marked by a scream that filled the room. Andre pushed his wife with his hand on her back, and Gael began to emerge.

As Gael appeared Manu’s face was transformed into one of inexplicable joy. She got up from the pool with Gael in her arms, and with Andre’s help, made it to the bed carrying the umbilical cord, which Andre would cut moments later.

There’s one other image that is incredible for me – one of Alice helping her father empty the bloody water from the pool with a bucket, after Gael was born.

I can say that Alice received the most beautiful gift that a child can – the experience of watching her brother being born at home. She saw how Gael was born, how her mother received him, and how her father helped them. Manu and Andre achieved the goal of having their daughter Alice sense within herself the arrival of her brother.

After Gael was weighed and dressed, Andre went for the bottle of champagne to toast the birth of their son.

It’s worth mentioning that the midwives and paediatrician had brought emergency equipment just in case of complications, with an ambulance standing by and a nearby hospital ready to receive them.

A friend once said to me that a child belongs more to the mother than the father. What I had just witnessed confirmed that. 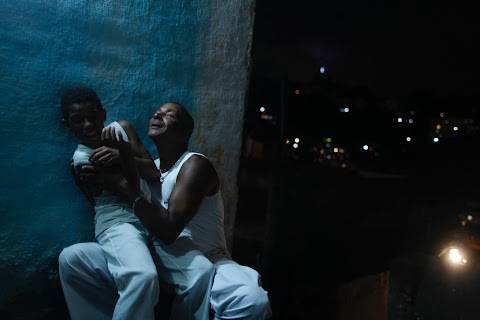 Dancing in the dark 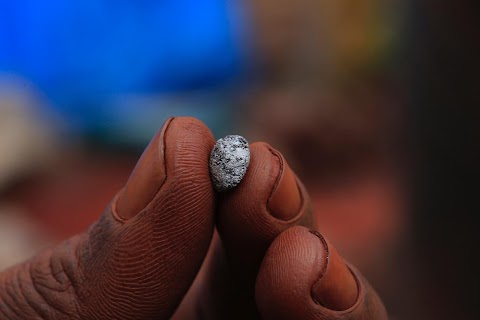