Reuters photographers reacted quickly to capture images from a car driver ramming into and then shooting at protesters in Seattle to a woman mourning the death of her husband during gang wars and police operations in Rio de Janeiro.

"I never push my luck to the limit," said Danish Siddiqui, who photographed a mob as they beat up a Muslim man during communal riots in New Delhi. "I always keep a buffer which helps me walk out with the pictures which tell the story."

From dramatic images from rural Australia where the air was thick with smoke during the worst bushfires in recorded history, to intensive care units in Italy and Texas where doctors in full protective suits worked valiantly to save lives, the photographers overcame logistical and technical obstacles.

Andrew Kelly: Undertakers Alisha Narvaez and Nicole Warring carry the body of a deceased person to the basement of the funeral home where they both work, in Harlem, New York City.

"In April 2020, the coronavirus was ravaging the Big Apple. With nearly all stores closed and streets empty of traffic and people, it felt as if the entire landscape of the city had changed. A lot of the public focus was on the frontline hospital workers, who were struggling to keep up with the high numbers of COVID-19 cases.

I got to thinking about where the dead were taken after the hospitals and decided to go to the nearest funeral home I could find. As I entered, I met Alisha and Nicole in the office. Initially, I was a little surprised. They did not look like what I imagined funeral directors would. Young, cool and stylishly-dressed, they greeted me warmly.

They told me they were inundated with the deceased and had a basement full of them as well as a full schedule of funerals. They were sometimes working 17-hour days to meet the increased demand.

As they carried the body into the basement, I was not prepared for what I saw. Bodies took up almost every available space. Some shared gurneys, some were in body bags on the floor, and many were stacked to the ceiling in cremation boxes along a side wall. Before this, I had barely seen a dead person. Now, I had close to fifty before me in this small room. Even through my mask, the smell was overwhelming. This is when the enormity of the coronavirus pandemic hit me.

When I arrived home a few hours after initially meeting Alisha and Nicole, my wife immediately asked me if I was ok. My face was still as white as a sheet."

Lindsey Wasson: "I had just stepped to the main window of the local newspaper office, and I was looking over the crowd during a Sunday evening protest against police brutality and racism – one of several that had rocked Seattle and other places across the United States since the death of George Floyd – when I heard a scream and commotion. I rushed to the window to photograph what was happening.

Stunned protesters surrounded a car that had driven into their ranks. A man brandishing a gun exited the driver’s side of the vehicle and the protesters backed away from him as he ran off and melted into the crowd. Medics rushed forward to help a wounded man lying on the ground nearby. Everything happened very quickly, maybe only a minute or so.

It has been very odd to see protests like this in my hometown. What feels different this time is the scale and how sustained it's been. I've never seen it go on for this long, with this extended energy and purpose."

For part two of A Picture and its Story 2020 click here. 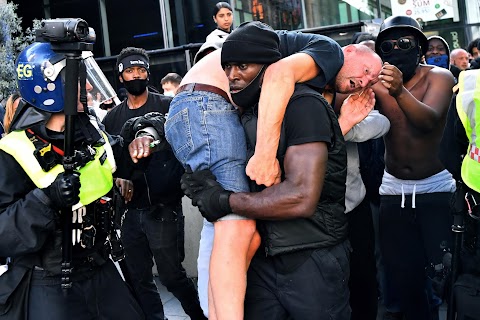 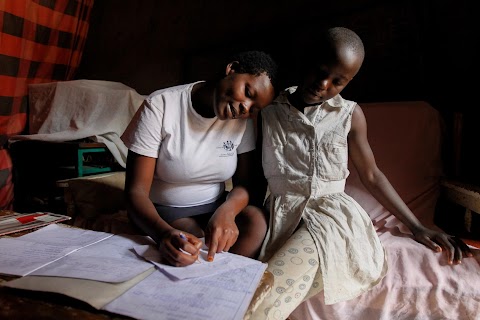