A man leans forward as a Buddhist monk at the Wat Bang Phra temple in central Thailand adds yet another tattoo to his already elaborately inked back.

The body art is not just for show. This man is one of many in Thailand who believe decorations like these have mystical powers to ward off harm, and he has travelled to the temple, which is especially renowned for its lucky tattoos, just ahead of its annual tattoo festival.

“At one point, the whole scene reminds me of food distribution at an overcrowded refugee camp – just with more smiling people.”

It’s very hot indeed. This is the beginning of the Thai summer and only a few hours after sunrise the temperature is over 35 degrees Celsius. It is also abnormally humid.

But for the people who have come to the Wat Bang Phra temple in central Thailand, such banal things as heat and humidity don’t really matter. They are here for a higher purpose.

Every year on a special day in March, thousands of devotees from all over Thailand (and some from abroad too) travel to Nakhon Prathom province, just over an hour’s drive from Bangkok, to take part in a magic tattoo festival. The celebration is held at a temple renowned for its tattoos, which are supposed to have supernatural properties.

People with such tattoos believe the elaborate inked drawings of animals and sacred script give them mystical powers, including protection from bullets or other dangers. In many ways, they are just like the protective amulets that are widely used in Thailand. When soldiers from the Thai army went to Iraq on a peacekeeping mission, for example, 443 of them carried 6000 magic amulets for the protection.

This special body art is done across the country, and all sorts of different people have it. But Wat Bang Phra is a special place that is particularly famous for its powerful, magic tattoos.

A few days before the festival, I was at the temple and spoke to a young man from Bangkok’s notorious Khlong Toey slum about his tattoos. His name was Salut, and he had his first tattoo done when he was 17. Now, nine years on, a large portion of his skin is covered in inked designs and there is barely enough space to add another one. But he still wants more, saying they protect him from danger and give him extra self-confidence.

I watched as a Buddhist monk observed Salut’s body while smoking a menthol cigarette that had been offered to him along with some flowers in exchange for tattoos. The monk then pulled out a traditional, half-meter-long needle and started inking sacred script in the tiny empty space around young man’s left nipple.

Using just a needle and ink made from herbs, a tiny bit of snake venom, cigarette ash and some other ingredients, masters at the temple make beautiful tattoos with great speed and computer-like precision. The recipe for the ink differs from master to master. Some just use sesame or coconut oil to make invisible tattoos that have the same powers as visible ones once they are finished and blessed.

The sacred tattoos, known as Sak Yant, can be drawn at the temple anytime, but today is a festival and a special day when the tattoos’ power can be renewed.

According to Buddhist beliefs, in order to maintain the holiness and magical power of a tattoo, bearers have to obey certain rules – they can’t kill, steal, take drugs, drink, lie or engage in sexual misconduct. Perhaps some of the people who come to the temple on the day of the festival don’t follow these rules very strictly and need to get their tattoos recharged. Lots of the devotees look like “tough guys,” and as they wait in the crowd they seem to be very determined to get the most out of what this special day has to offer.

As the pleasant dawn turns into a very hot morning, tattooed devotees start working themselves into a trance. At one point, one by one, they jump up from their prayer positions and start making their way towards a statue of the “Big Master”. Some of them run like maniacs, others crawl, but all of them mimic the creatures that are tattooed on their bodies.

Over the next few hours, there will be many tigers, some chickens and snakes and some other powerful thing that I don’t recognise, all trying to make their way to the statue. A wall of volunteers acting as human air bags stands in the devotees’ way to make sure people don’t get hurt.

Most of devotees are men, some are teenagers and some are older gentlemen, but there are a few women and foreigners in the crowd too. The foreigners take the whole thing very seriously and the Thais don’t seem to care about these weird-looking white people in their midst. As one of the devotees says: “We are one big tattooed family here”.

This tattooed family continues its religious performance until it is finished a few hours later. Just as the heat becomes unbearable, as if someone had given an order (probably they had, but I didn’t hear it) everyone jumps up at the same time and starts charging towards the Big Master statue. I’m talking about a few thousand people, many of them in a trance.

As a photographer, if you don’t get onto the stage where the monks and the shrine are at this point, there will be no more pictures and no more fun. But thanks to the advice of some of my more experienced colleagues, I manage to get up above the devotees before it is too late.

The noise is – as is traditional for such religious ceremonies – far too loud and I don’t think I can even hear my own thoughts. The horrible noise stops me recording more sound for my multimedia report, and I go back to where I belong to get more intense pictures of believers trying to reach the statue and the shrine.

The monks have hoses like those of fire fighters, which they use to spray the crowd with holy water. They also give out flowers, fruit and other food including smiling pigs’ heads, taken from around the statue. Everyone on the ground seems to be desperate to get their share and, at one point, the whole scene reminds me of food distribution at an overcrowded refugee camp – just with more smiling people.

Not long after, it’s all over. No one is in a trance anymore except the person with the microphone who continues to test both my nerves and the limits of the oversized speakers installed all around us. In the quiet corners of the temple, refreshing food and drinks are served by ever-smiling volunteers.

After we all leave and the festival is over, the temple will continue its normal routine – making more special tattoos for those who need them and believe in their powers.

This is Thailand after all, the land of smiles and rituals that people from different cultures consider strange and perhaps do not fully understand. For local people, however, it all seems to be working well.

If you’re interested, see you next year at the temple. Just remember to bring earplugs. 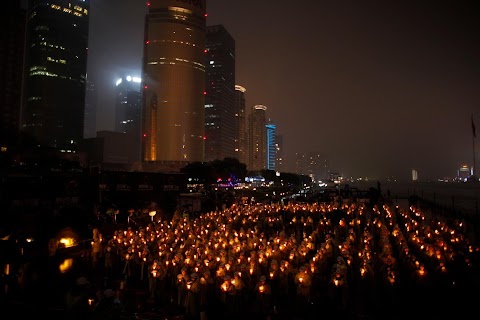 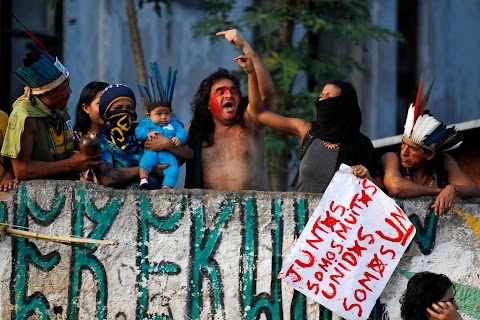 Evicted from the shadow of Maracana