Department For Environment Food and Rural Affairs officials load crates of dead ducks onto a lorry during a cull at a duck farm in northern England.

Bird flu was found on the farm days after it was discovered in Dutch chickens, forcing authorities to destroy poultry and restrict exports, although it was not a strain known to be deadly to humans.

"In my spare time, I like fishing and if there’s one thing fishing teaches you, it’s patience - which a photographer needs."

I’ve been a photographer for more than 25 years; in that time, there’s been Bovine Spongiform Encephalopathy (BSE), Foot and Mouth (twice) and Bird Flu (ditto). Days like these with workers from government body DEFRA in white suits, death, bodies and disposal - are starting to feel routine.

The days are filled with hanging around in places where we’re not wanted, feeling cold, so I’m ready for them. My sandwiches are packed the night before, the flask waiting to be filled with coffee the next morning. There will be no cafes where I’m going.

I woke up before the alarm as I always do when I’ve got an early start - 5 am, in the pitch dark.

It’s 130 miles from my home to Nafferton, near Driffield. I listen to the radio, making sure that I keep up with the story. It takes two-and-a-half hours. I needn’t have rushed: From the minute I park up near the farm, it’s clear that nothing today will happen quickly.

I pull on my wellington boots. During the foot and mouth scare washing boots and bio-security became a part of the job but overnight it’s become clear that this strain - H5N8 - is a low threat to public health and the full protection gear won’t be needed.

In my spare time, I like fishing and if there’s one thing fishing teaches you, it’s patience - which a photographer needs. I filed an early picture of the gas being delivered. Another when crates arrived to cage the ducks. And then I waited.

The hours tick by. I can see down into the farm from two public roads. The DEFRA people stop for a lunch break. I chew the fat with colleagues and eat biscuits.

The light is starting to go. Surely, surely, they are going to do the job today? We know they are when an 18-wheeler lorry is parked in front of us, in an attempt to block our view but I can still see through the leafless trees.

And so it begins; the story unfolding as it has so often before; white-feathered ducks, loaded into crates are driven from a barn on a lorry. Probably 200 in each, tightly packed to stop them panicking and injuring each other in the process. Or maybe just to get as many in at one time as there are 6,000 to cull.

It takes a surprisingly long time for them to re-emerge. Maybe it’s 10 minutes, maybe longer. And then, no movement at all, as their limp bodies are loaded onto a waiting lorry.

I’m far away so I’m shooting on a 500mm lens with a 1.4 converter mounted on my Canon 1DX. As I watch the carcasses loaded, some begin to fall off.

I file off the back of the camera using a wifi transmitter and a very weak 3g signal to our desk in London. My colleague, Toby Melville, decided to crop into the picture of the carcasses falling from the lorry, because he liked the symmetry. There were other pictures I took that day that I liked better. It goes to show how wrong you can be.

They say humankind cannot bear too much reality. I don’t know about that, but I do know I was pretty sure it wouldn’t see the light of day; not in Britain, at any rate, where we’re not keen on photographs of dead animals. So I was surprised when I checked the newspapers the next day and saw that it had been used.

I have done my job, told the story but with so many birds killed, there can be little satisfaction in it. 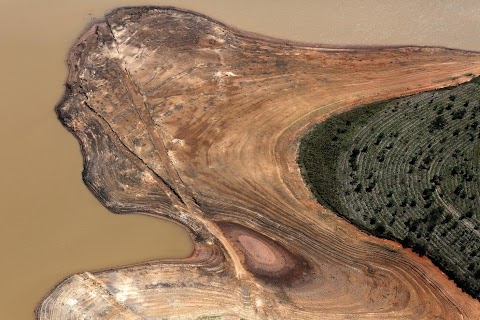