Artist Pyotr Pavlensky holds a knife after cutting off a part of his ear at the Centre for Social and Forensic Psychiatry.

In an action titled "Segregation," Pavlensky protested against the use of psychiatry for politically motivated purposes. He said he cut off his earlobe to demonstrate how authorities could "cut off" an individual from society, using psychiatric and medical diagnoses to intern people in penitentiary hospitals.

"It does not happen often to see a naked guy with a slicer in his hand, with which he cut his earlobe off."

A fence, four-metre high. Three things: the artist, a knife and an ear. Outside, 2 degrees Celsius. One second – and a stream of blood, obeying the universal law of gravity, flows down, adding a new colour to the picture. The artist, completely naked, will spend the next two hours with a knife in his right hand and a cut off earlobe in the left. He doesn’t blink, or perhaps I cannot see it. He is silent. He looks, but he doesn’t see. He’s frozen and only the cold air that hits him, shakes him, gives him shivers, brings out a man in him and not a Roman statue that materialised on the wall enclosing the Serbsky State Scientific Centre for Social and Forensic Psychiatry. And of course, the blood, still flowing and which I will later see on his leg and his buttocks. A passing pigeon sits briefly next to him, taking a part in the protest – the artist and the wall become one.

Half an hour passes before the first police car arrives and stops nearby. Cautiously, two policemen approach. Then, three security guards come out of the clinic’s entrance. And a fourth person, a female doctor.

But the artist installation stays silent.

“He’s not responding to attempts of a contact,” the doctor tells herself.

Ten minutes later, an ambulance arrives and a corpulent woman with a blue cross on her uniform – seemingly a medic – gets out. But it turns out that her main task is to argue with the doctor from the psychiatric ward and forbid a girl – the live-in girlfriend of the artist – to film. Aside from that, she’s not helpful, perhaps except a phrase:

“He’s cut his stomach open!” confidently, she utters a diagnosis. By now, the streaming blood has formed a crimson crust in the folds of his stomach.

“Be careful! He has a knife!” warns a newly arrived cop, turning his back to the artist to demonstrate a shortened version of the Kalashnikov assault rifle, strapped tightly on his back.

“Now, he can jump and start cutting us all,” notes a fireman, inhaling a cigarette – his crew arrived a few minutes earlier. He wears a red helmet and a fire-proof uniform which seems to protect him from accidentally setting himself on fire from cigarettes.

But by now, there are also regular spectators in this surrealistic theatre: an old woman with her granddaughter passes by. The elderly woman demonstratively turns away her head – and her granddaughter uses the moment to study the subject around whom all these respected people gathered. I understand her perfectly – it does not happen often to see a naked guy with a slicer in his hand, with which he cut his earlobe off and who sits atop a tall fence in front of a psychiatric hospital in Moscow’s centre.

There are other people. And more cops. Last leaves keep falling down from the trees – who knows, perhaps today is the last sunny day of the year? I look at the artist. He is shivering. I am shivering as well. Although I am wearing a cosy jumper and a warm jacket, my fingers are beginning to freeze in my gloves. The sun gets behind the clouds – the winter is near.

It’s been long. Very long. All keep looking at him – and he looks at something, somewhere far out. Later, when asked what was he thinking about, he said: “This is my frontline, where it is sometimes necessary to sacrifice a part of one’s body, or a sense of comfort. For the protest to succeed, the action must be completed. And those people I talked about in this protest have been exposed to the punishment of our psychiatric system and they sacrificed their lives, which will never be the same.”

Additional décor – guards carry out blue mattresses and form circles around the artist, asking him to jump. But this leads to nothing. He sits silently, does not see them, or pretends not to see.

Time goes by. “They are about to take him down,” whispers into my ear a girl nearby. At this moment, four policemen get behind him. The first, gently removes the knife away and holds his hands to the side. Two other cops take him under his arms, one is smiling. The artist is not resisting. Two men with a stretcher enter the area.

Again, just a regular street scene. Only a lonely cop unwinds a red and white tape to block the scene off from the street. Life at the end of the tracks 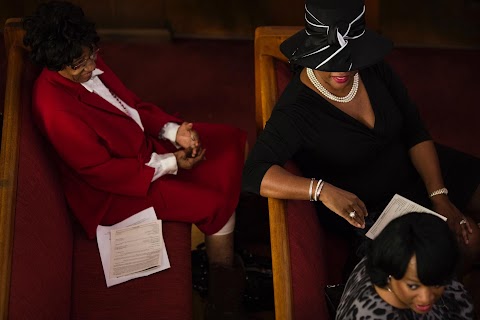 Faith and worship in the Bible Belt