Singapore is one of the world's busiest shipping hubs. The city-state is linked to more than 600 ports in some 120 countries and is often called 'the gateway to Asia'.

Reuters photographer Edgar Su documented life in and around the bustling port, from the processing of massive cargos, to the lives of traditional fishermen who still work in nearby waters.

"As soon as a container was unloaded, the radios blared instructions for the next one on the list. Time is money, and there was no time to waste."

Singapore’s port is one of the busiest in the world and has long been a key part of the island’s economy. I took some time last year to document the shipping hub, and was surprised to see how closely life in Singapore is linked to it.

Walking along the coast on a fine day, you’ll see countless ships anchored in the sea around the city-state. At East Coast Park, where many leisure activities take place, I saw a group of school girls conducting soccer training as tankers lined up to make a call at the port. It was quite a peculiar scene - in the foreground daily life was going on, but in the backdrop a massive industry was working around the clock to get cargo shipped or vessels refuelled.

Even from atop Singapore’s iconic Marina Bay Sands Hotel - a modern landmark that houses some of the most lavish entertainment for visitors spending top dollar - you have a full view of vessels waiting silently for their turn to enter the port.

According to its Maritime and Port Authority, Singapore sees around 140,000 calls from vessels every year. Its many terminals work around the clock to serve them, often handling 60,000 containers a day.

From a height of more than 10 storeys, through the glass bottom of a crane driver’s cockpit, I could see trucks lining up in an orderly fashion to deliver the unloaded containers as a group of managers sat in control rooms monitoring every aspect of the operations. As soon as a container was unloaded, the radios blared instructions for the next one on the list. Time is money, and there was no time to waste.

But what struck me most about this city were the traditional fishermen who still ply their trade in the waters around the modern port using lines and fish traps. They were part of a small group who lived on a patch of sand on the western coast near the port. When they are not fishing, they make a living waxing boats and greasing engines for boat owners.

Two of them, Ahmad and Sami, showed me their way of life one afternoon, as they headed out in their wooden boat affectionately named “The Merlin”. Before setting off, Sami told me about vessel: “It’s not the biggest, but it’s the fastest, I think you will like it” It was indeed fast, but plenty of water splashed into the boat every time it cut into a small wave. Within minutes I was totally drenched – much to their amusement.

We set out that day with one objective: to set up fish traps. But all we did in two hours out at sea was go line fishing, smoke cigarettes, talk about life and do more line fishing.

Ahmad and Sami were born on the small islands off the coast and grew up fishing with their fathers. As Singapore developed, their village moved to the mainland and they could no longer maintain this lifestyle. So every minute at sea was a total escape from what they said was the “stressful life” of the mainland.

As the sun was close to setting, they got ready to set up the fish trap. The tide was finally low enough for them to cast their nets safely. And the low tide also uncovered a small island of dead corals and rocks in the middle of the sea, which I used as my vantage point. The water was up to my knees at some points, but it was completely safe. Still, it wasn't a reassuring feeling to be alone in the waters as they rowed further and further away.

As they set up the trap, just outside the port, I thought to myself how wonderful it was to have their old way of life and the rapid pace of the modern city in that one shot. After the trap was set, Sami called out from the boat: “Stay there, we are coming to get you now, we have some time left. Do you want to do some more fishing?”

What can I say? Of course. 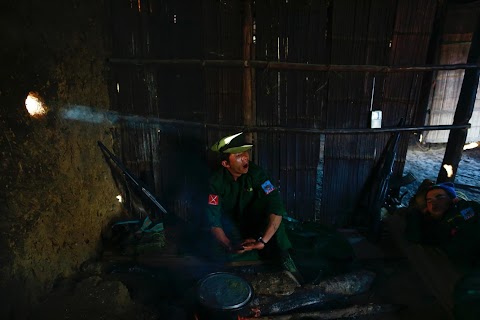 Amid the opium fields 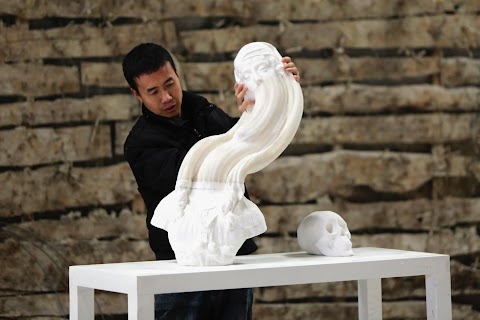