Every 12 years the Hindu celebration of the Kumbh Mela or ‘Pitcher Festival’ comes to the northern Indian city of Allahabad. With it come tens of millions of devotees.

The crowds of pilgrims who flock to what is the world’s largest religious festival are here for a special purpose: to cleanse themselves of sin in the sacred river Ganges where it meets other holy waters.

“A small but important problem arises when editing Kumbh Mela pictures: you get lots of naked men’s genitals standing out in most of your best shots.”

The Kumbh Mela, or ‘Pitcher Festival’, is one of the biggest gatherings of people on earth.

It goes on for 55 days and takes place every 12 years in each of four cities in India: Allahabad, Ujjain, Haridwar and Nashik. During the festival, devotees come from all over India by plane, train and bus to take a dip in the waters that they believe will wash away their sins.

I moved to India from Afghanistan last year and the Mela, as it is called, was one of the assignments I wanted to cover. The challenge for me was to make a clear picture of the masses of people assembled for the holy bath.

A few days before the festival officially started, in temperatures of about zero degrees, I would head out to the riverside every morning at 6 a.m. to illustrate the scene, taking pictures of devotees who arrived from all around.

One of the highlights of the Mela is the Shahi Snan or royal bath, during which thousands of Naga Sadhus or holy men with long hair and beards march naked, smeared in ashes, to the river to take a bath.

Other activities include religious processions by holy men and devotees. Some ride in chariots but most are on foot. Religious music plays as performances take place, sometimes with the accompaniment of elephants

On Monday, at around 5 a.m., the first group of naked holy men marched towards the riverside. Some held axes and swords, some wore flowers around their necks, some wore nothing, but all cheered and roared as they jumped in the waters. Police had cleared the area of ordinary devotees, and journalists were pushed aside.

Taking photographs was pretty easy; you just needed to get in the cold water and make sure you didn’t get knocked down by the excited pilgrims or by overexcited members of the media.

There was an abundance of opportunities to take pictures, but the aim was to get the very best and nothing less. This meant scanning through hundreds of people, splashing water and changing light among singing and running pilgrims – both men and women, young and old.

A small but important problem arises when editing Kumbh Mela pictures: you get lots of naked men’s genitals standing out in most of your best shots. But if you were lucky, a splash of water or a flower bed would have covered the private parts. 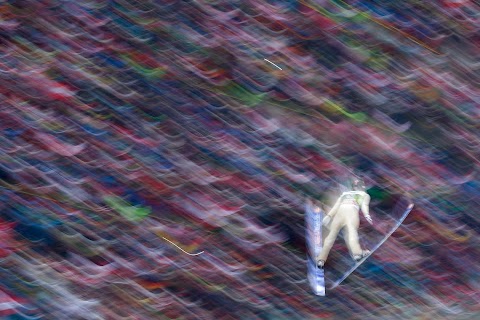