Few sports involve defying gravity so far, so fast and with so much flair as ski jumping.

Reuters photographer Kai Pfaffenbach went to document the flight of the athletes who take part in this extraordinary discipline at the Four Hills Tournament in Germany and Austria - an annual event that covers jumps in four cities over nine days.

"Four different cities in nine days. Up to 30,000 spectators cheering their heroes when they soar down."

For a German sports photographer covering first division Bundesliga soccer, the weeks between December and the end of January are actually quite boring. While other major leagues (not just in soccer) continue their season, Bundesliga is “off” for four weeks.

Although I would normally tend to miss my weekly fix of soccer, I always look forward to the so-called “winter break”. It gives me time to cover one of the sports events I really love to photograph: the Four Hills ski jumping tournament.

As a young boy watching it on TV, I could never imagine standing on top of such a ski jump. But this year for the 14th time I travelled from Oberstdorf – Germany’s most southern city, where the opening part of the event is traditionally held – to Garmisch-Partenkirchen for the “new-year’s-jump” on January 1.

After those two jumps in Germany, the tournament convoy rides to Innsbruck in Austria and then the final “epiphany jump” takes place in Bischofshofen. Four different cities in nine days. Up to 30,000 spectators cheering their heroes when they soar down.

But it seems ski jumping is not very popular overseas. Besides a strong Japanese team, all the top athletes come from central Europe. The leading nations this winter are Austria, Norway and Germany. No wonder this year’s tournament was a duel between Austria’s ski jumping superstar Gregor Schlierenzauer and Norway’s Anders Jacobsen.

Just as wind, snow and rain are new challenges to the athletes during each jump, it is a great challenge for a photographer to find new angles and develop ideas for “new” pictures.

The officials at the International Ski Federation FIS are incredibly helpful and give me opportunities that I never get anywhere else.

They let me mount a camera on a pole behind the jumper to capture the moment before they descend the starting beam. And they allow me to set up a camera directly at the end of the slide track at the so-called “jumping table.” It gives you a unique view from ski-level and shows you the panoramic view the jumper has.

The one and only problem is the speed of the jumpers. They reach almost 100kmh just before they take off and although our cameras have 1/8000 sec as the fastest shutter speed and can take up to 14 images per second you will only have one proper picture of the athlete “taking off.” Using a photoelectric barrier solved the “timing” problem.

Shooting very fast shutter speeds “freezes” such moments, so I decided to go with a very slow shutter speed to show how fast the guys are sliding down the ski jump and soaring through the air.

In some situations such photographic tricks make the picture, and in others, the background or special lighting makes the difference. For years, the main picture from the Innsbruck event showed the jumpers flying over the St. Wilten basilica and its graveyard. Yes, ski jumping is dangerous, but not that crazy.

Unfortunately, there were a few crash landings during this year’s event. Germany’s 17-year-old Andreas Wellinger was just about to celebrate a great attempt in Bischofshofen when he fell down and kissed the snow. Luckily he wasn’t injured at all and could start in the second run.

By this time Schlierenzauer and Jacobsen were jumping in their own league. Carefully watched by the judges, they were pushing each other to longer and wider jumps. In the end Jacobsen won the first two jumps in Germany, while Schlierenzauer won twice on his Austrian home turf.

The players final rankings are determined both by the length of their jumps, and the points they receive from the judges. So this time it was Schlierenzauer who celebrated his great triumph and won the tournament for the second time in a row. 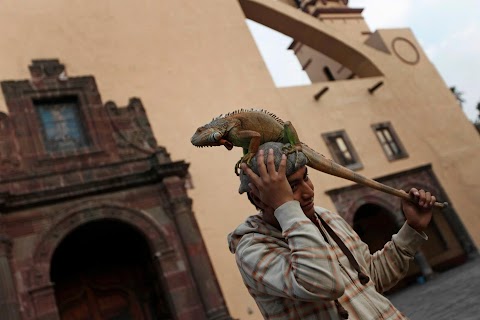