With the prospect of all these people entering retirement, photographer Lucy Nicholson decided to visit the oldest active U.S. retirement community: Sun City, Arizona. Here, seniors can take part in all sorts of activities, from square dancing to synchronised swimming.

“At a Saturday night dance Donald Smitherman, 98, swung his wife Marlene, 78 around the dance floor, before dipping her for a kiss.”

An 80-year-old and a 20-year-old were getting married in Sun City. A local newspaper reporter came to cover the wedding. The first question the reporter asked was: “Don’t you think the sex will lead to premature death?”

The groom replied: “If she dies, she dies”.

Fred Isenberg, 75, broke into a broad grin as he told me the punch-line of this joke during a break in a tango dancing class he was taking with his wife Suzanne, 71.

As with all good humour, the joke is loosely inspired by reality.

Del Webb predicted that retirees would flock to a community where they were given more than just a house with a rocking chair in which to sit and wait to die.

Today’s residents keep their minds and bodies active by socialising at over 120 clubs such as square dancing, ceramics, roller skating, computers, cheerleading, racquetball, silver craft, yoga, and stained glass. The seven recreation centres offer a multitude of sports and games for Sun City’s 55-and-over population, in addition to golfing on the eleven courses.

I met Dario Rossini, a slim 90-year-old former air force pilot, doing sit-ups in the gym one evening. He told me he does at least 100 sit-ups a day, and spends an hour in the gym four to five days a week to keep his muscles and joints healthy. As I watched, he moved to different gym machines to lift weights.

At a Saturday night dance Donald Smitherman, 98, swung his wife Marlene, 78 around the dance floor, before dipping her for a kiss. “I’ll be 99 in April, and I played 18 holes of golf today,” he told me proudly.

“Fitness is huge,” he says. “We know that with staving off heart disease and everything else. We stay active and our blood vessels will stay cleaner, we don’t get the build-up in them.

“If you talk to people in a traditional old people’s home, 90+ percent of them will tell you what they used to do. That’s all they have. Here in Sun City people are talking about what they’re planning on doing, and what they’re doing next.”

John Longo is looking forward to competing in the Masters Swimming National Championships in Cleveland this spring.

Longo went to Coney Island to swim in the ocean as a boy growing up in Brooklyn. But the 88-year-old only learnt to swim competitively when he took swimming lessons to improve his stroke at one of the Sun City recreation centre pools. Now he wakes up at 5:30 a.m. six days a week to swim a mile.

Sun Citians don’t avoid the wear and tear of old age, but a lot of them do seem to defy it.

“We all have ailments of some kind,” Ruth Pharris, 66, told me, before Donna Summer’s “Hot Stuff” started blaring from the stereo, and she joined the Sun City Poms cheerleading squad in a rehearsal for a performance they’re doing in Laughlin, Nevada.

Virginia Harvey, 103, was ballroom dancing until a few months ago, when she travelled to Las Vegas to dance in a competition, and injured herself falling in the parking lot.

“I’ve got arthritis all over so that’s why I exercise in the water,” says Barbara Miller, 77. Miller was joined by 90-year-old Inge Natoli for their three-times-a-week early morning synchronised swimming practice.

Natoli emigrated from Germany to Michigan, and has lived in Sun City for 29 years. She put on a pink track suit after the swim, and hopped into her golf cart to go to take a woman who has cancer to the hospital.

“That’s the great thing about Sun City – everybody helps each other,” commented Miller.

Sun City Visitors Center estimates 17,196 of its residents do some kind of volunteer work, saving the community roughly $34.5 million, and keeping property taxes down. There is a sheriff’s posse, a street cleaning crew, and cheery seniors who take meals on wheels to housebound people.

Constantine Moundalexis, 55, moved to Sun City from New Jersey to live next door to his ailing mother, Catherine Morgan, 82, who is confined to her bed.

“She was a schoolteacher in New Jersey for many years, and raised three children all by herself,” he says. A lot of good things this woman has done for us, and I’m very grateful, and that’s why I’m here.

“I know in Europe and different parts of the world, the older generation is taken in by the younger generation. They live with their parents and they take care of them directly.

“Here in this country we don’t do that as much or as well. And that was something I did not want to see for my Mom.”

Balancing his mother’s need for medication to take away the pain she feels when she is moved with the greater awareness she has when she is not knocked out by drugs is a daily struggle.

Death is a constant reminder in a community this old.

Poignant love notes are attached to many of the headstones at the Sunland Memorial Park cemetery. A blanket of bouquets stretches to the horizon.

Sheriff’s Posse Commander Arthur Jenkins says he see the same man come to the cemetery every day to be with his wife.

More than 20 percent of people are widowed. Women outnumber men by a ratio of about three to one.

The Sun City singles dance club every Friday averages 250 members, with as many as 400 at this time of year.

Bob Ralyon, 79, whose wife died 2 and a half years ago, was chatting to a table of ladies at a singles pot-luck.

“When you’re married for over 50 years, the word single sort of scares you,” he said.

“And some of these people, they’re scared, they’re lonely, they’re not sure what they’re going to do tomorrow. And this is a very good place to get them out to do things, when normally they would look at four walls, which is depressing. You can’t do that, you’ve got to get out there.

“Your marriage is now a memory, and there’s a chance that there’s someone out there special that you could ‘hook up with’. That’s not my language, but it’s the language of the kids today. So I’m always looking!” 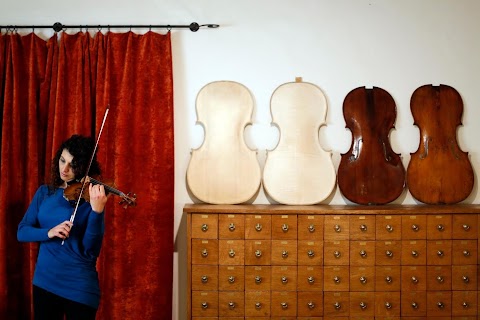 The craft of music