Their actions triggered bloody attacks against Muslims by predominantly Christian militias, and the inter-religious violence has only worsened since Seleka leader Michel Djotodia resigned as president.

"Nothing could have prepared me for the extent of this crisis."

I landed in Bangui, capital of the Central African Republic, for what was going to be the most intense four weeks of my career. I would be covering a sectarian conflict that has left thousands dead and around a million people displaced.

Nothing could have prepared me for the extent of this crisis. I witnessed the cold reality of people fleeing, losing their belongings and being killed because they belonged to a certain religion and found themselves in the wrong place at the wrong time.

As soon as we touched the runway at Bangui’s Mpoko International Airport, it was obvious that something was wrong. From the windows of the plane, we had a view of plastic sheets set up as shelters by the United Nations Refugee Agency – an image synonymous with conflict around the world.

At this camp, the people I met felt a degree of safety and protection. No one had any intention of returning to their homes yet – it seemed that this crisis was far from over.

As I acclimatised, I built my contacts and tried to grasp the situation. I felt that it was important to do what a photographer does when immersed in a new story: walk, observe, meet new people, and walk some more.

Bangui is a poorly developed but colourful city. It has the energy of a place that carries on and reinvents itself through good times and bad.

At the beginning of my coverage, I took my quietest images. They depicted something of the spirit of the people I met, without the macabre sight of death or injury that became all too common over the course of my stay.

One of my favourite shots shows some women walking so close to the runway of the airport that one of them screamed in fright at the deafening noise of a plane landing.

Another, taken in the early hours the morning, shows a man in a canoe, shrouded by mist and peddling gently down the Oubangui River towards an unknown destination.

I went on to visit a camp of “anti-balaka” militias – mainly Christian groups who have been carrying out bloody attacks on Muslims. The sectarian conflict between the two sides broke out after mostly Muslim Seleka rebels seized power in March, brutalising Central African Republic’s majority Christian population.

Their actions have sparked counter-attacks by Christians against Muslims and the violence has only gotten worse since the Seleka leader stepped down as president last month. The charity Medecins Sans Frontiers has warned that violence against Muslims is now increasing, and many thousands are fleeing the country.

While I was in the “anti-balaka” camp I felt a surreal air of playfulness. I saw dozens of mostly very young men, armed with wooden swords, machetes, old Second World War carbines and the occasional AK-47 assault rifle. All wore talismans for protection. They believed they could walk into battle and not be killed if they carried those talismans with them. Some wore wigs, animal horns, cool-looking sunglasses and the occasional woman’s dress, for reasons I have yet to fully comprehend.

Later, I went to a Muslim neighbourhood and spoke to people about the conditions they were living in. They told me about killings, lootings, and the destruction of their homes. They wanted to know how the international community was going to protect them.

The exodus of Muslims out of Bangui in the last few weeks has been so great that the armed Chadians protecting the convoys have not been able to prevent some attacks. A few days ago, a man fell off a packed truck leaving the capital. Unable to get back onto the vehicle, an angry crowd quickly caught up with him and cut him down.

Witnessing the brutality, I asked how people could be capable of killing a person like this, stabbing a lifeless body over and over again, and doing much worse. I was told that I couldn’t understand – this was revenge for what Seleka fighters had done to the population for nearly a year.

A man who became my friend told me that the Seleka had killed two of his brothers. The thirst for revenge is too much for the killings to stop, he said.

I also saw an “anti-balaka” militiaman talk with fury and cold determination. It was during a reconciliation meeting between the two communities, overseen by the general of the French military peacekeeping operation. Later, when the meeting had ended, I was told that he had lost his wife and both his parents to a Seleka rampage. I saw no forgiveness in his eyes.

The scenes I witnessed made me think of the ongoing clan wars in southern Somalia, where generations upon generations take revenge on one another for past violence. There, the non-stop spiral of “an eye for an eye” creates chaos and instability in a country already barely strong enough to stand on its own.

I hope it is not too late for the Central African Republic to escape this cycle. 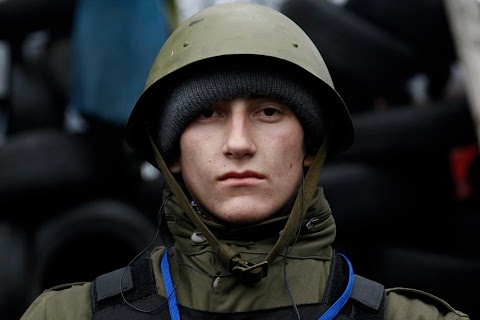 Portrait of a protest