If these two dummies could think, they would be mentally preparing themselves for an unpleasant ride.

They are going to be hurled at 64 km/h (40 mph) into a block during a crash test run by the German motor club ADAC. The group, which has a special facility accredited by Euro NCAP (New Car Assessment Programme), carries out a whole range of tests on cars in order to rate their safety performance.

That’s a lot of cars. No doubt, it also means a lot of accidents every day. But I had the chance to witness the work of some engineers – along with their reticent assistants – whose job it is to help prevent these accidents from happening by researching car safety. I spent two days at the crash-test laboratory of the German motor club ADAC in Landsberg, near Munich, photographing the “daily routine” of crash test dummies.

The ADAC has a crash test facility accredited by the car assessment programme Euro NCAP, where it probes the safety of vehicles, carrying out different tests and rating cars' performance. I was allowed to photograph the goings-on in the lab, including a frontal crash with a block fitted with a so-called “deformable aluminium honeycomb face.”

According to Euro NCAP, this type of test is “intended to represent the most frequent type of road crash, resulting in serious or fatal injury. It simulates one car having a frontal impact with another car of similar mass.”

The dummies I saw were 1.78m tall (5 foot 11) and weighed 78 kg (172 lbs). Their kids were the size of an average 2-year-old human being. For a test that I watched, the car was filled with two adult-sized dummies and two child-sized ones, placed in the safety seats.

During such tests, the car and dummies are prepared by a group of engineers to simulate a realistic drive - something like a family trip to the countryside. All of the liquids in the car are replaced with water and special sensor equipment and cameras have to be installed too.

After all these preparations, the sensor-stuffed dummies are rigged up and connected to a network before they are seated in the car for their “ride to hell”. The whole process of getting the dummy-family into position takes almost a day. It’s strange when you think that the crash itself only lasts 15 seconds.

The most difficult part for me was knowing that the crash is a unique event which can't be repeated if you miss it. To be on the safe side, I installed two remote cameras triggered wirelessly while I was shooting with one handheld model.

Once the technicians double-checked all the dummies’ positions and the cabling, the car was slowly pushed to the start of a catapult track from where it would be accelerated to the crash speed of 64 km/h (40 mph).

While I was installing my remote camera, one of the staff had been applying make-up to the dummies. This might seem bizarre, but the colours are used to see where their body parts have made contact with the vehicle during the impact.

Then, after one and a half days of prearrangements, with the car in its take-off position, the tension rose.

The testing area was sealed off, a rotating flashlight and an alarm warned of the imminent crash.

After 15 seconds and a huge bang, the ADAC team went to the car and observed the immense damage, as they collected evidence for their report.

They got their data, I got my pictures, and our dummy family survived the crash without lethal injuries, ready to ride another day. 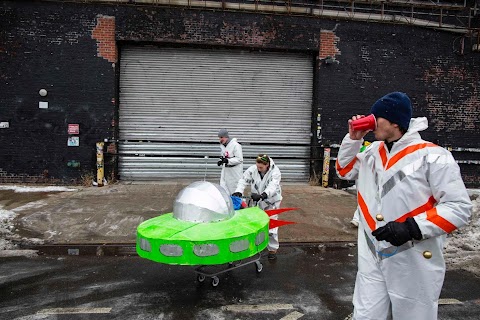 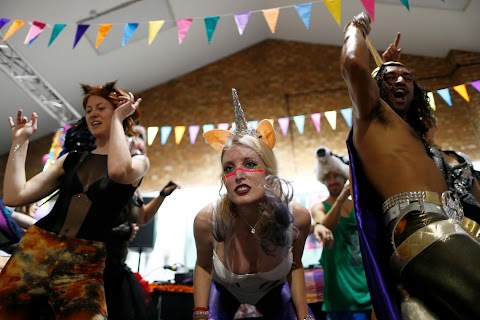