Two protesters sleep curled up next to a tent in Gezi Park, a green space adjoining Istanbul’s famous Taksim Square, where protests against a redevelopment project ballooned into mass demonstrations against what critics call the authoritarianism of Turkish Prime Minister Tayyip Erdogan.

Taksim Square, occupied by crowds of demonstrators, has become a centre of the protests that have rocked cities across Turkey.

"Nowadays, Taksim smells of tear gas all the time."

Taksim Square is the heart of Istanbul. It’s the meeting point for lovers, tourists and – in many cases – protesters.

On the weekends, if you stroll around the square and crowded Istiklal Street, a hub for shops and bars, you can witness various political demonstrations: women protesting against domestic violence, soccer fans, anti-government far-leftists groups or the “Saturday Mothers,” demanding to know the fate of missing relatives. Riot police are never far away, so it's not a big surprise if you smell tear gas all of a sudden in the middle of Taksim.

Nowadays, Taksim smells of tear gas all the time. A peaceful sit-in protest to save Gezi park, at the side of the square, turned into a week-long riot between police and anti-government demonstrators. Now everybody in Taksim, from shopkeepers to taxi drivers, has grown accustomed to tear gas and barricades blocking main streets to the square.

As a news photographer, it became routine for me to cover protests in the city centre and deal with brief waves of tear gas. But it’s not that easy to cover riots in Taksim anymore. After three days of clashes, protesters occupied the square and police stand far away.

Both sides rest during the day and fight from midnight to dawn. Like the other news photographers, I have to run behind the riot police or protesters in the alleys of Taksim. Almost a week passed with sleepless nights, heavy clouds of tear gas and stones flying over my head. The other day when I was talking to my wife on the phone she asked me if I had eaten anything or not. My answer was: " I don't remember."

Now it's quieter than the first week. When I think back, I am grateful for my gas mask, which enabled me to breathe, my helmet, which protected my head and my Reuters ID card. They saved my life and gave me great support in my non-stop work.

It's obvious how a helmet and a gas mask protected me, but the mention of my Reuters journalist card may sound strange. Since the beginning of the Taksim story, Reuters pictures have been widely published in the Turkish media. My colleague Osman Orsal's picture of the “woman in red” became the symbol of the Gezi Park protests.

Objective Reuters journalism is appreciated by the Turkish public. Whenever angry protesters asked me which media outlet I worked for, and I showed my Reuters ID, it worked really well. I can say with certainty that Reuters is now better known in Turkey than it was before.

Protesters camp out in Gezi Park at the side of Taksim Square. Demonstrators have been hunkering down there, even taking part in yoga classes and setting up a makeshift library, in a statement of their intent to stay on after a week of protests. 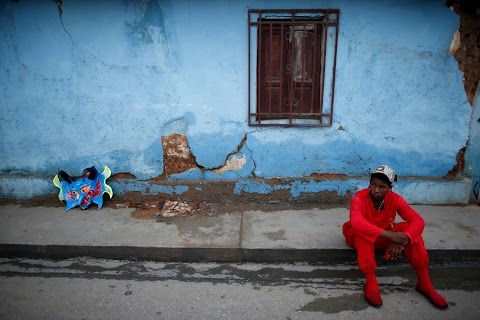 Dance of the Devil 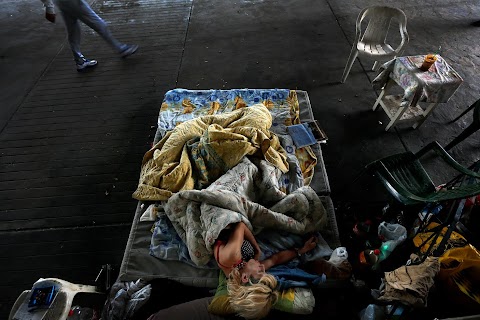 Down and out in Athens