They knit clothes for Raquel Guimaraes, a Brazilian fashion designer who expanded her business with the help of inmates working in exchange for pay and reduced sentences.

"I was impressed by the solidarity between prisoners."

A stylish, high-society blonde inside a maximum security prison, teaching prisoners to knit. It truly seemed like a scene from a movie.

But that’s just what I found in Juiz de Fora, a medium-sized city in Brazil’s southeastern state of Minas Gerais.

Just a few years ago, Raquel Guimaraes, now 32, began working with her mother to knit clothing in tricot. They enjoyed success and with an increase in orders she needed more knitters, but couldn’t find enough. That was when she decided to visit the Arisvaldo de Campos Pires maximum security penitentiary in Juiz de Fora, about 100 miles (160 kms) north of Rio de Janeiro. There, Ms. Guimaraes found her perfect knitters, people with available time, some with as many as 20 years to spare.

At first, she presented a proposal to the prison administration to train female inmates to produce her clothing. But after talking with the warden, Andrea Andires, they concluded that it would be more productive to work with male prisoners, an idea that at first seemed a little bizarre.

These prisoners have violent histories, and the question was whether men locked up for offences such as armed robbery, drug trafficking and murder could learn to knit tricot. This was the gamble that Guimaraes and Andires took, with excellent results.

Today, 18 prisoners work to produce handmade knitted clothing. And with that work they not only receive extra money but also reduce their sentences by one day for each three days spent knitting. Guimaraes sells the creations under her Doiselles brand around Brazil, and in select stores in San Francisco, New York and Tokyo.

When I reached the prison entrance to begin my story, the guards immediately confiscated my cell phone. Phones are prohibited inside Brazilian jails, despite the fact that everyone knows many prisoners have them. I was also prohibited from photographing the outside of the prison without special permission from the warden. They explained to me that I could only photograph inside the room where the prisoners were knitting.

I went through four great iron gates, each with three permanent guards, and walked to the warden’s office, where I was greeted with lunch. Three heavily-armed guards and two prison attorneys then escorted me inside to where the prisoners were knitting.

It looked like an oversized jail cell. The guards announced my presence to the inmates, saying that I was a journalist there to do a story about their work. One attorney had a form with him for each prisoner to sign, authorising me to photograph them. I introduced myself and asked if any would mind being photographed, but none of them objected.

I spent two days taking pictures of the prisoners, although the first day was cut short when the atmosphere inside the jail suddenly became tense. It seemed to me like the beginning of a prison riot, with inmates yelling and banging against the doors of their cells. The guards watching over me asked me to leave quickly, because they couldn’t guarantee my safety at that moment.

I picked up my equipment and left, but on my way to the main gate I realised that this wasn’t going to be a riot that would make the news. Otherwise, I would have tried anything to stay inside and cover it. It turned out to be just a problem caused by an inmate who was ill and was requesting to be taken to the infirmary. I was impressed by the solidarity between prisoners. The support that they all gave to one sick companion worked to get the guards to attend to him quickly.

On my second day inside the prison, designer Raquel was there. It was incredible to see her next to the inmates, conversing with them and teaching them to knit. She was relaxed, compassionate, and it was hard to believe that anyone in that cell had committed a crime serious enough to lock them in a maximum security penitentiary.

I finished my story with photos of the prisoners leaving the knitting room to be taken back to their own cells where they would be locked up, or to the courtyard for a few minutes of what they called the “sunbath.” A guard quietly moved to my side and whispered not to stand too close to the doors or railings near the inmates. He was afraid that I could be pulled away and taken hostage.

All I could think of was the contrast of that atmosphere with the one inside the knitting cell, where the prisoners have a chance to socialise, raise their self-esteem and hopefully return to society anew.

Music in the air 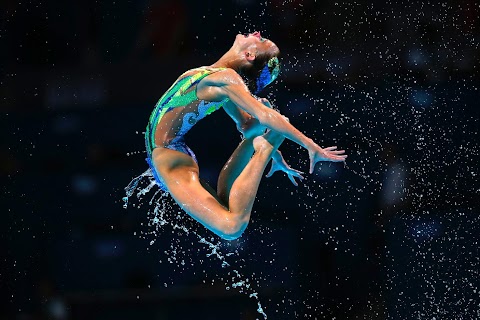