Forty-six-year-old Matoula Kastrioti, who suffers from multiple sclerosis and has been using a wheelchair for the last six years, takes a dip in the sea off the Greek coast.

For people with kinetic disabilities like her, going for a swim here unassisted would long have been more or less impossible. Now, however, it can be done thanks to a device called “Seatrac,” which harnesses solar energy to allow wheelchair users to move in and out of the water.

"In Alepochori, a coastal town a few miles from Athens, parents let their children use the machine as a diving board and vandalism is not uncommon."

In Greece, with its hundreds of islands, one of the longest coastlines in the world and a great climate, people are lucky enough to be able to enjoy the beach for nearly half the year.

Swimming in the sea is a way of life for many Greeks and a habit they’ve grown used to from their earliest years. Tourism is the country’s biggest industry, and almost all visitors plan at least one visit to the sea during their holiday.

But for some, things are not so simple. Those with kinetic disabilities have always had to ask for help to enjoy the simple pleasure of swimming in the sea, since wheelchairs cannot be driven on the sand or over pebbles.

Unfortunately, it isn’t unusual to need this kind of assistance in a country where facilities for the disabled are in general very poor, even at the most basic level. A lack of infrastructure from the state and hostile behaviour from many locals mars the daily life of those who depend on wheelchairs to get around.

In this difficult environment, a team of university students and professors developed a solar-powered device which enables autonomous access to the beach for people with kinetic disabilities. It’s called the “Seatrac” and is an innovative project covered by European and U.S. patents but faced with realities on the ground in Greece.

“I feel like I built a penthouse apartment without a building underneath it,” says engineer Ignatios Fotiou, one of the inventors.

The device, which has been sold to municipalities and placed on a few beaches around the country, has been very much welcomed by its users. Those who used it last year waited eagerly for the summer season to begin again. Many even arranged their summer holidays and rented homes near beaches where the device has been set up.

“It makes you feel free and able to do things which you could not imagine you could do on your own,” said 52-year-old Lefteris Theofilou, a paraplegic man who has been stuck in a wheelchair since 1992.

Still, no matter how modern and innovative the device is, it is not enough to overcome the “disabilities” – not of the people who use it, but of Greek reality.

In Alepochori, a coastal town a few miles from Athens, parents let their children use the machine as a diving board and vandalism is not uncommon. Although the municipalities bought the devices, locals say they did nothing in terms of developing a supportive infrastructure and they are not able to solve a problem when it comes up.

At a busy beach in Alepochori, a small ramp needed to allow access from the street to the device became a huge issue and was never built by the authorities, but by a local man instead. A balustrade to support the disabled on the way to the beach has been a very expensive and complicated project for the local government to tackle.

“The support by the local authorities simply does not exist,” says Minas Georgakis, whose wife Matoula suffers from multiple sclerosis and has been using a wheelchair for the last six years.

Good idea, nice beaches, great weather but the lack of respect and the way the state treats its citizens make you think that there is a long way to go before all of these elements work in harmony. 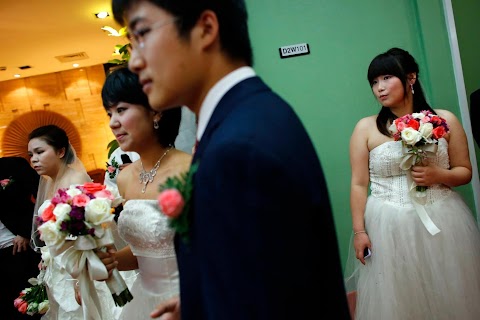 A long way from home