Mohammad, a 12-year old Syrian refugee wearing a scarf with the colours of the Syrian independence flag, stands outside the Reyhanli refugee camp.

As of April 8, there were 24,564 Syrian refugees registered in Turkey. On April 5 alone, more than 2,800 crossed over from the Syrian region of Idlib.

"I could not converse with the children but I was still aware of what the drawings told me: A tent is not a home. "

Only a half hour’s walk from the hundreds of tents lined up in the camp, lies the banks of the Orontes River, the natural boundary between Turkey and Syria.

If the stranded refugees were to cross the river they would be back in the land where they were born and grew up, among people speaking the same language. From the border it is only a short journey to their town or village and their own homes.

The distance is short but what keeps children away from their homes is not always distance. Sometimes it is politics and the conflicts born of politics. And it is precisely this strife that forces the children to live a life in tents in bleak territory.

There are reasons behind all conflicts; they have their antagonists, those in the right and those in the wrong, the strong and the weak. Who is right and who is wrong may change according to everyone’s way of thinking but there can be no doubt that the most innocent and the most vulnerable victims of all conflicts are the children.

Syrian children have found refuge at the Boynuyogun refugee camp in Turkey’s southern Antakya province. Hundreds of them now live with their families in identical tents pitched in the camp.

The Turkish administrators of the camp provide food, clothing, shelter and medical care for the refugees. Because no one can predict how long they will have to stay in this camp, Arabic-speaking Turkish teachers have been assigned to conduct classes for them. These teachers have grouped the children into age groups and teach them in tents, turned into makeshift classrooms.

I decided even before I entered the camp that I would observe and document only the children. When I entered the camp I made my way straight for the tents used as schoolrooms. It was noon and teachers had sent the students to join their families for lunch. I heard children’s voices coming from a tent and when I peeked inside I saw some children drawing. I introduced myself to the teacher and asked what they were drawing. The teacher said he had asked the children to make a picture of “My Dream House”.

When they finished their drawings each child showed them to me and I photographed them. They had all drawn different houses but most of them stood under a bright sun. In defiance of the bare concrete of the campsite they now lived in, some had adorned their drawings with plenty of flowers and trees.

Possibly their dream house was the one they had left behind in Syria. I could not converse with the children but I was still aware of what the drawings told me: A tent is not a home. No matter how long you may stay there, you can never belong to a camp. Everyone comes from a city, a small town, a village but above all, we all belong in a house.

Perhaps this is their way of telling us these homes are not a dream but reality. 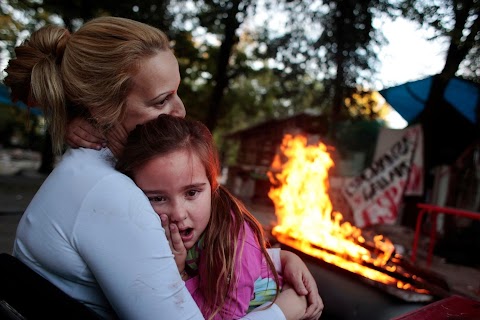 Demolition of a gypsy village