Village doors in Helmand are made from a variety of scavenged material - oil drums, shipping containers, bits of cloth, rice sacks or tins - and are often the only splash of individuality and colour in a drab, beige landscape where one compound looks almost identical to the next.

"Photographing doors allowed me to imagine the hidden world behind them"

While out on daily patrols in Helmand Province last month, I photographed doorways.

Going into this embed, I really wanted to find something gentle and quiet to photograph. The news has been so flooded with violent images of unrest over the last few months that I wanted to offer something from a major conflict zone that was less news-driven and more reflective.

These doorways symbolize the closed nature of Afghan society, as well as the fact that United States Marines are tolerated — but not entirely welcomed — by the local population. I suppose, in some way, they also reflect my own frustration about not having access to the people of Afghanistan while on military embeds. Photographing doors allowed me to imagine the hidden world behind them, like the line from Baudelaire’s poem, “Windows“: “Looking from outside into an open window one never sees as much as when one looks through a closed window.”

The doors themselves are made from a variety of scavenged material — oil drums, shipping containers, bits of cloth, rice sacks or tins — and are often the only splash of individuality and color in a drab, beige landscape where one compound looks almost identical to the next. The shapes, materials and textures fascinated me.

There were, of course, constraints while shooting the series. Because of the extreme threat of I.E.D.’s, I was not free to deviate from the line of march and create the compositions I might have wanted. I had to follow directly in the footsteps of the Marines in front of me and settle for whatever angle was available as we walked through the villages, usually for two or three hours daily. I also couldn’t stop for more than a few seconds, as we were continuously on the move.

Often I would see a door that I liked, but it was in shadow or harshly contrasting light or just too far away or at the wrong angle to photograph well. It became a game of sorts, trying to capture these fleeting glimpses of color and creativity.

It kept my mind off the fear of I.E.D.’s. And it also broke the boredom of long, uneventful patrols where conversation was impossible because I was too far away from the Marines in front of and behind me. (The risk of hidden roadside bombs means everyone keeps a safe distance from one another to avoid multiple casualties in case of an explosion.)

With my imagination piqued by the inaccessibility of the compounds behind these doors, I could spend long the patrols wondering about invisible lives, and about stories I would never be able to tell. 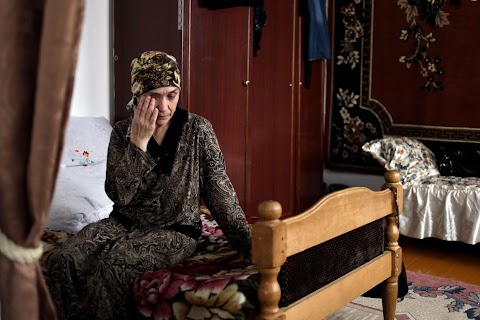