A demonstrator tries to break a window displaying an image of an ancient greek galley during anti-austerity riots.

Reuters team of photographers in Greece covered the daily protests for many, long months.

"So how do you cover a story like this? A story that affects you and your family.."

In the past 20 months the Greek financial crisis has been one of the world’s top stories. Day in, day out words like, IMF, ECB, and Troika are mentioned as some of the most common words in my country. People who knew nothing about economics and had never heard of strange words like “spreads”, “haircut” and “bailout”, now seem to have become almost experts in financial matters. Everywhere you go in Greece people talk about the same issues — an upcoming default, the economic meltdown, the misery the unemployment, the rising prices, the possible loss of their deposits in banks if Greece goes back to its old currency, the drachma.

According to the latest polls, Greeks are the most unhappy people in Europe and it’s easy to see why. On the streets of my home town Athens, people don’t smile much, they argue a lot and on some days it seems that misery looms over the capital. If you add to that the terrible traffic jams caused by one or more protests that occur every single day, on top of the increased number of beggars, drug addicts, illegal immigrants and homeless, Athens seems in its worst shape ever. According to another study last year, the center of Athens was “closed” for 2-3 hours daily due to protests, resulting in, according to shop owners, a financial catastrophe for many in the once booming downtown Athens.

These daily protests often lead to very violent riots and clashes between protesters and the police, or even clashes between rival groups of protesters. The words austerity measures are the most “painful” though — the government has agreed along with the troika to impose some of the toughest austerity measures ever imposed by a government in Greek history. There is not a single Greek who hasn’t be affected by the austerity plan — many people lost up to 50% of their income. Greece has the most “new poor” people in Europe and many people believe that “the worst is yet to come”.

So how do you cover a story like this? A story that affects you and your family, a story that left some of your friends and colleagues and members of your family without a job and hope for the future? A colleague who has worked as a photojournalist for over 25 years at one of the top Greek dailies was marching along with several thousands of press people towards the parliament in protest against recent layoffs and pension reductions and other tough measures said to me: “Yannis, I walked from home today. I have no money to put petrol in my motorbike.” and “My last payment was 450 Euros and it’s the first payment after July!!” It was a sunny Tuesday, October 18, 2011.

Our new office in Athens is in the very spot where everything happens; on Athens’ Syntagma square (Constitution square) next to the Greek parliament where all the demonstrations and protests conclude almost every day. It is also the place where “the Indignant” occupied for more than a month last spring and where some of the most extreme violent clashes have taken place in Greece. Our building, as with all other buildings on Syntagma square, remains shut when riots break out. My team of photographers, Yiorgos Karahalis and John Kolesidis, and I climb the seven floors of our building from an external emergency staircase several times a day carrying all our photo gear and safety gear of helmet and gas mask. On those days we skip the gym! But this is the easy part of the job.

Many times when you are out covering the riots, you have the feeling that everybody hates you or loves you depending on their needs. The protesters want you to photograph the police beating them up or shooting tear gas at them but they don’t want to be photographed throwing rocks or petrol bombs at the police. Several times we’ve been victims of the police and sometimes protesters’ brutality because we took pictures of them during the riots. Many times protesters will ask you to erase your cards or in some cases they will destroy your equipment, threaten you verbally or even hit you. There is generally an anti-journalistic feeling on the streets.

Police certainly often find the opportunity to show their feelings towards press photographers by usually beating them. Recently Greek reporter Manolis Kypraios lost his hearing permanently and partially lost his ability to speak. He now walks with the help of friend and a stick after policemen threw a stun grenade at him during riots in central Athens. A long time Athenian photojournalist Tatiana Bolari was brutally punched by a Greek riot policeman but a picture served as witness resulting in a police investigation. A few days later the chief of the riot police was dismissed from his position.

I and the other members of our team have been kicked, pushed, stoned, had our equipment vandalized and verbally threatened several times. Last September while covering clashes following an anti-austerity protest in Greece’s second largest city, a policeman threw a stun grenade at me. The explosion ripped a hole in my boot and caused minor first degree burns to my foot.

On another occasion a policeman threw a rock at me causing a large bruise on my stomach. Yiorgos Karahalis was hit in the head by a rock thrown by protesters and John Kolesidis was pushed and kicked several times. Most recently a masked youth attacked my camera with a metal bar resulting in the “death” of my 16-35 mm zoom lens.

I feel privileged to lead a team of very dedicated and talented photographers covering a story of this magnitude. I’m the eyewitness to some of the most important moments of Greece’s modern history. Being a photojournalist who has covered wars with Reuters for over 24 years I feel sad to be covering a “financial war” in my own country but at the same time I know that I must remain unbiased and objective until the end of it. My team and I will keep covering the story with dedication and no fear! 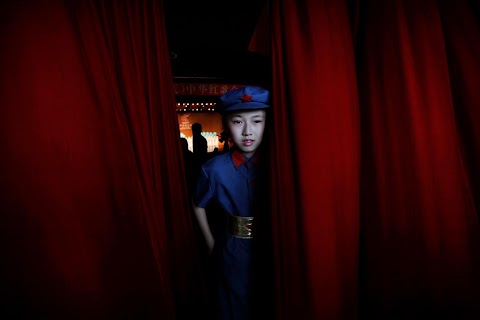