Towns and cities across Ukraine's industrial east have fallen to pro-Russian separatists over the past month in an armed uprising that Ukraine says is orchestrated by Russia - a charge Moscow denies.

Reuters photographer Marko Djurica met a group of pro-Russians who man a barricade outside a government building in Donetsk, many masked and wearing body armour. He shot their portraits one-on-one.

"They wanted to know if anyone supports them, and what will happen in the end."

“You have got to meet the Mexican,” said Wolf.

“Who is the Mexican?” I asked.

“He is our boss, you can ask him about this barricade, come with me.”

Wolf was dressed in a green uniform without any insignia. “Donbass” – the eastern Ukrainian region where pro-Russian separatists seem to be increasingly gaining control – had been written on his green helmet in permanent marker.

His face was covered with a balaclava and he wore black boots and a black flak jacket, into which he had tucked a small baseball bat. He spoke great English and didn’t look more than 30 years old.

As we approached a massive, eleven-story, Soviet building we passed stretches of barbed wire with old tires and various construction materials piled up behind them. I saw a poster that read: “The Mexican’s League” in orange letters. This was his barricade.

On March 3, a couple hundred pro-Russian demonstrators stormed the Donetsk regional government building after clashing with police who were guarding the main entrance. They successfully entered through a side door, and in the end made it to the second floor where the parliament sits. Unrest continued to spiral in Ukraine and the following month separatists declared a “People’s Republic of Donetsk”.

The confrontation began because the local population, made up mainly of Russian-speakers, seek less influence from Kiev over their region. Kiev and the West have accused Russia of being behind the upheaval, Moscow denies it. Now, two months after the initial attacks, demonstrators are inside the regional government buildings and masked men stand at the barricades.

Wolf waved to a man posted behind the tires, and he opened up a small, improvised door for us on the north barricade. Stacked boards, beaten-up chairs and bricks lay all around us. The whole place reeked of soot and burning metal which seemed to have been used to keep men on the barricade warm.

A few of the masked men waved to Wolf and me. It was a bit intimidating. We passed through a glass door, then entered a big marble hallway with a high ceiling. It was filled with stale air and an unusual silence.

About 15 people looked in my direction as we entered. Some were just sitting, others sat behind computers that they themselves must have brought. Others walked around or just drank tea. At the end of the hallway stood the only one who wasn’t wearing a mask. He had a green military jumpsuit unbuttoned to the chest, beneath which protruded a blue-and-white striped shirt. His hair was tied in a ponytail and he had a smile on his face.

“Hello, I am the Mexican, you are welcome among us!”

“But you don’t wear a mask. And why do they call you the Mexican?” I asked.

“I spent some time living in Portugal, but people here didn’t understand that well where I was, and as such, I became the Mexican,” he smiled. “And as far as the mask is concerned, I haven’t got anything to fear.”

Wolf had explained to him earlier that I was a photojournalist and that I had asked to take a series of portraits of people who man the barricades. The Mexican seemed to have nothing against it.

“How would you like to take our pictures?” he asked.

“To be honest, I don’t know. I thought I’d look at the space first and check out some fitting background…” I hadn’t finished my sentence when I saw a massive chair underneath a neon light.

“Here, we could sit over here, one by one. I think that would look nice.”

I picked my lens, adjusted the light, and people began to pose in shifts. Each subject was relaxed, and struck whatever pose suited him. That suited me too.

While I was taking pictures I spoke with the Mexican, and Wolf continued to translate.

“You are asking what we want and what we are fighting for? To live like the rest of the normal world and for our basic human rights.

“Here, these people you are photographing, among them is a history teacher, one has a PhD in electrical engineering, a third works in an international company, and we have blacksmiths, miners, economists… Normal people who woke up and began to rebel.”

“Against what?” I asked.

“Against the imposition of other people’s will, against the growing fascism in the West of the country, and we are fighting for…”

Here Wolf chimed in himself: “We are fighting for democracy, despite the fact that that is a word we don’t like because it is so much used by the demonstrators in Kiev, on Maidan. But yes, for democracy, for a referendum.”

“And how will you vote in the referendum?” I asked again.

“Everyone will vote however they want, some for federalisation, some for a republic, some for joining Russia, but the point is that we have the right to decide for ourselves,” added the Mexican.

I just had a few more people to photograph, and then I would be finished. A man with a dog sat down and the shot I got of him was one of my favourites. The big black dog looked dangerous, and he stared straight into the camera. Later I petted him and he turned into a sweet animal who only wanted a cuddle.

We continued speaking and I was interested in what they would do if the police or army attacked them in an attempt to re-take the building. They told me they were unarmed and that if the riot police attacked, they would fight til the end. But if the military came with weapons, they would probably withdraw.

I photographed the last of the group, and then I began to show them the pictures on my camera display. They laughed and joked with one another in Russian.

Later, they asked with interest how people in Europe see the situation in Ukraine and whether or not they know what is really happening. They wanted to know if anyone supports them, and what will happen in the end. They seemed a bit scared.

I didn’t have a good answer to their last question.

When the witches come out to play 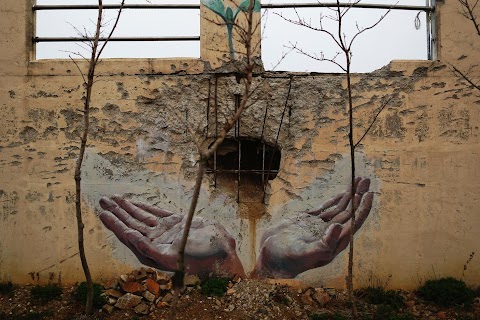